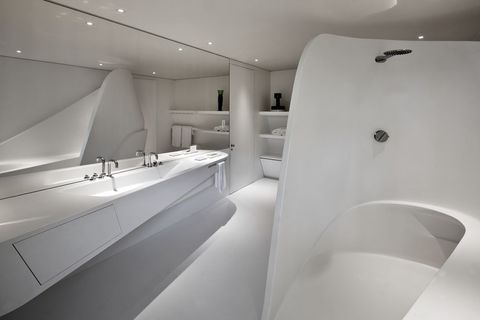 Craig Robins
Robins founded real estate company Dacra Development in 1987, and 14 years ago, he also launched the first Design Miami fair. Along with his wife Jackie, he lives in a 1940s house on Miami Beach, which was renovated in 2015. He tells us the story behind the striking master bathroom.

Architect Zaha Hadid didn’t like the bathtub we were thinking of getting, so she offered to design one for us. Zaha was a close friend; she came over when we were remodelling the house and my wife showed her pictures of the bath we were looking at. The next day, she called me and said: ‘Those bathtubs are rubbish – why don’t I design one for you?’ A week later, she called again and insisted on doing the whole space.

Living with art, architecture and design has been important to me since the beginning of my career, so I was blown away to have a room created by one of the most important contributors of our time. I always try to work with brilliant creatives, so if I was giving instructions to someone, I would usually say, ‘I need a bathroom’ and that’s all.

What I love most about the bathroom is that it’s functional sculpture. It serves its utilitarian purpose impeccably, but it’s also a beautiful space. Often in a bathroom, the tub and the shower will be separate, but here, they are connected, which means if you want to take a bath, you can shower easily first without walking across the room. I think that’s a brilliant touch.

The only objects we have on display are a trio of vases by Ettore Sottsass, which add colour to the room. Together with Zaha’s very clean design and the Boffi fittings, they make a nice combination.

We entertain a lot at home and it’s very rare that guests don’t want to see the bathroom. One fun moment was walking in on Martha Stewart doing an impromptu shoot with the photographer Todd Eberle.

The bathroom is the nicest room in the house – I spend so much time in there. And I really do think about Zaha when I’m inside her creation. miamidesigndistrict.net

Inside my bathroom: Craig Robins on his bathing routine

Bath or shower? Generally I shower, but I like to take a bath too, with Epsom salts. Lying there, it feels like I’m in a futuristic palace.

Any bathing rituals? When I’m having a bath, I’ll read a book. I’ve usually got more than one on the go at a time: currently I’m reading about the geology of the Grand Canyon, which I’m going to be visiting soon. I’m also reading a biography on the Wright Brothers, who invented the first functioning flying machine, by David McCullough. When I am shaving, I will listen to a book too. I get them in both audio and print so I can go back and forth.

What’s in your bathroom cabinet? We have shelves and drawers in the bathroom rather than a cabinet, but I use them to store a toothbrush, toothpaste, my shaving kit and sunblock.

Andrea Serboli
Co-founder of Spanish practice Colombo and Serboli Architecture, Serboli lives in the Eixample district of Barcelona. We look at his bold vision for the bathroom.

Originally the bathroom took up one corner of what is now the living room. The apartment had a very traditional layout, so I wanted to open it up completely, with a bathroom in the middle – a blue box – that sits between the day and night zones.

It was an organic idea to use blue. I think of it like a fruit, with a cold colour outside and a warm shade of peachy coral inside to convey the idea that this is a sanctuary, the most intimate part of the flat. Also, it feels Mediterranean and postmodern. The shade of blue changes depending on the light and sometimes looks more like a dark green. After I finished the bathroom, I found some pictures from my travels in Mozambique a few years ago and I realised that the Centro Cultural Franco-Moçambicano in Maputo has exactly the same colours, which I thought was funny.

Japanese-style bathrooms also influenced me, particularly the grey floor tiles that continue upwards to form the outside of the bath. I matched the colour of the grouting to the walls; it gives a room personality on a relatively low budget.

I created a round fluted window through to the kitchen. If I am having a bath, it’s really nice – and dramatic – to switch off the light and lie there with the natural light coming in.

So that it didn’t look like a room from the Teletubbies, I selected a matt black shower head and taps. When you use a lot of colour, I think you need a contrasting shade to balance it out.

A year and a half after finishing the bathroom, I still love it. The idea is that everything is warm and soft, not just the colours, but the shapes, too. I added a bespoke, curved, coral-lacquered sink cabinet made by Rec Disseny Carpentry, a custom-made curved mirror and a globe lamp that I bought from the Monsó y Benet store in Barcelona. colomboserboli.com

Inside my bathroom: Andrea Serboli on his must-haves

Why is artwork important to you? My father is a painter and many of my friends are artists, so I have always collected art. I have one piece in the bathroom that’s propped up by the sink, which I rotate. It’s usually a print of two faces by Spanish street artist and illustrator Grip Face.

What’s in your cabinet? Everything – it’s a mess! But I do keep my Kiehl’s body lotion and shaving foam in there.

Do you listen to music? Of course! I like neoclassical music by the likes of Italian pianist Ludovico Einaudi and German composer Ramin Djawadi. Or electronica DJs such as Max Cooper, who I listen to on Spotify.

Best thing about the bathroom? The shower. I have a rain shower with a 40cm-diameter head and I spend a long time standing under the water.It makes me feel like I’m removed from the rest of the world.

Inga-Lill Ovin
Ovin founded Marrakech Design, which specialises in encaustic tiles, in 2006, and lives in an 1890s house in Fiskebäckskil on Sweden’s west coast. She talks us through how she transformed her compact and calming bathroom and shower rooms.

Creating a feeling of space in the bathroom was important. I chose a light-hued tile for the walls and traditional white wood panelling for the ceiling, both of which make the room seem larger than it is. For the floor, I used our iconic ‘Dandelion’ patterned tiles, designed for us by architectural partnership Claesson Koivisto Rune. I chose the chocolate brown colourway to introduce warmth. Brown is a very underestimated colour – here in Sweden, we go a lot for blue and grey, but you don’t tend to see chocolate brown so much.

We designed the room around the bathtub, which we positioned under the window so I could lie there and look out at the ocean, and make the most of the natural light.

The wooden cabinet was custom-made by a marine carpenter who, because of his experience working on boats, is a master at utilising space. It’s painted dark brown, so it contrasts nicely with the brass sink, which was handmade in Marrakech. The lion-shaped taps are very special too – I bought them from an antiques shop in Florence. They really add character to the room.

I work a lot with plants and mirrors, both of which can totally change the atmosphere of a space. To give the bathroom a more industrial feel, I asked our plumber to make a custom-built copper towel rail. I always like a room to have a twist.

For the shower room, we used ‘Goose-eye’ tiles on both the floor and ceiling to create impact. It was a collaboration with Swedish designer Mats Theselius, and the pattern has multiple layout possibilities – here we used it differently on opposite walls. As for the ceiling, at first it was white, but it only took me a day to realise that it would look much cooler in black, so we repainted it straightaway. Now it has attitude.

I have a linen shower curtain, which is quite unusual. Of course, it’s not as practical as plastic, but it is so much nicer and does dry quickly (I also prefer hammam towels to terry towels – again, they are quick-drying). The curtain is such an easy thing to make and really softens the tiles to make the bathroom feel cosy. marrakechdesign.se

Inside my bathroom: Inga-Lill Ovin shares her special rituals

Daily routine? Every morning, I have a cold shower. Part of the Wim Hof method, which has a lot of science behind it, is about the benefits of cold showers for your mind and body. It has such an energising effect.

Bath soundtrack? Right now, I’m listening to Swedish jazz singer Isabella Lundgren. Her voice puts me in a good mood. I light a scented candle from Byredo and maybe have a glass of wine.

Favourite bathroom products? Italian soaps from Farmaceutica di Santa Maria Novella, Argan oil from Marrakech – it’s the number one treatment for wrinkles for Arabic women – and anything that smells of lavender.

How does the space make you feel? Peaceful. I never bring my phone or any electronic gadgets into the bathroom – I don’t think they belong – and it is the only place in the house where I can guarantee not to be disturbed.