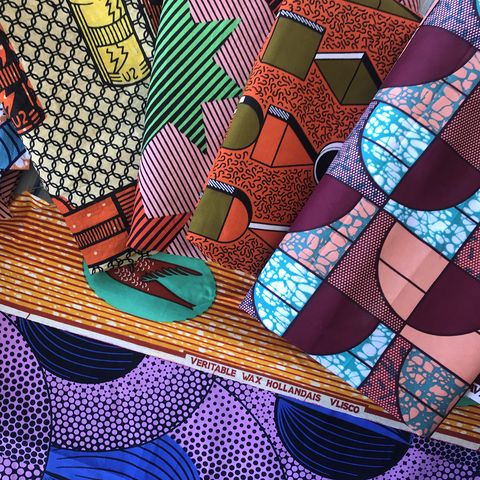 Traditionally, the production of bògòlanfini was a shared affair. Malian men would weave the cotton cloth on narrow looms and women would dye it with mud that had been fermented in clay pots for up to a year. Hence the name: bògòlanfini when translated literally from Bambara means ‘mud cloth’.

It is also one of dozens of textiles native to West Africa, a region encompassing 17 different countries and only a little smaller than the mainland United States. Others include kente, a woven cloth from Ghana, and khasa, strip-woven woollen textiles made by the nomadic Fulani people.

There is also adire, a kind of indigo resist-dyeing perfected by Yoruba women in southwestern Nigeria; and in Igboland (the southeastern part of the country), akwete, a handwoven textile often made from combinations of cotton, sisal and raffia. The latter features distinctive combinations of stripes and abstract motifs – although hundreds are known, only a select few are traditionally deployed on an individual piece.

As you might expect, the survival of such intricate and distinctive textile traditions has been turbulent. Colonial powers, including the UK and Netherlands, flooded the region with cheap, factory-produced textiles in the mid-19th century, stifling home-grown production.

Adire cloth, by contrast, experienced something of a renaissance in the early 20th century, as dyers experimented with the glut of new cheap European fabrics at their disposal and attracted buyers from across the region.

Today, it is not only the skill and history of such textiles that enthral designers and makers, but also colour combinations that feel fresh and unexpected, as well as the scope they offer for reinterpretation and embellishment.

After a career as a fashion journalist, she launched her eponymous brand in London, drawing on both sides of her heritage to create fabrics, poufs, cushions and lampshades in joyful and generous mixes of hue and print.

Related Stories
Duro Olowu and Soane Britain launch fabric range
Eva Sonaike’s West African-inspired fabrics
Hadeda lifestyle brand launches African homeware
This content is created and maintained by a third party, and imported onto this page to help users provide their email addresses. You may be able to find more information about this and similar content at piano.io
Advertisement - Continue Reading Below
More From Materials
4 ways that roof windows can impact your home
Created for From ELLE Decoration for Created by ELLE Decoration for
VELUX
Why it's time to give chintz a second chance
Advertisement - Continue Reading Below
Manuel Canovas: remembering the king of pattern
Parquet flooring: the ultimate guide
Inspiring ideas for decorating with stone
Created for From ELLE Decoration for Created by ELLE Decoration for
Salvatori
White marble: your essential decorating guide
The guide to terrazzo: everything you need to know
How to restore or replace sash windows
Graham & Brown reveals new anniversary collection
Liberty’s new home fabrics and wallpapers