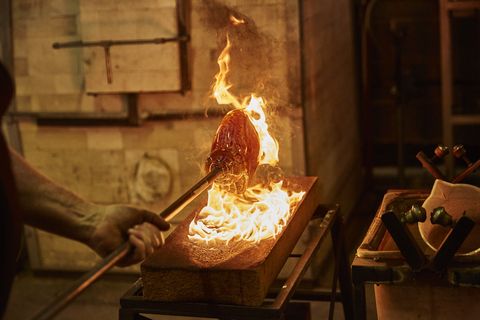 There is an argument that London is becoming a victim of its own success. That the city’s rapid gentrification, the influx of foreign capital and the resulting explosion of house prices are combining to push out some of the very people who make the place interesting for the monied minority in the first instance. Back in the 1990s it was possible for up-and-coming artists and designers to find huge studio spaces at cheap rates in Shoreditch’s disused factories, now increasingly they’re being pushed further and further away from the centre of the city or, in some cases, choose to move out altogether.

In this context the success of London Glassblowing is quite remarkable. The studio was founded in Rotherhithe during 1976 by Peter Layton, a man who has genuine claims to being a pioneer of the studio glass movement in this country. And this year it is celebrating a decade in its latest home on ever-so-fashionable Bermondsey Street, across the street from the Fashion and Textiles Museum. Importantly this is a place where things are made. While the front of the space is taken up by the gallery, at the rear is the hot shop which contains 12 resident artist, including the likes of Tim Rawlinson, Hanne Enemark and Louis Thompson.

The artists create Layton’s designs during the day but are free to use the equipment to work on their own pieces in their spare time. Meanwhile the gallery itself plays host to a rolling programme of exhibitions from both resident artists and guest makers throughout the year.

As part of its anniversary the company has published a new book, A Celebration of Colour, and will be holding an exhibition in September that promises to feature work from all the resident artists. As London’s transformation continues apace it’s something we should all cherish.

Much of Peter Layton’s most recent work has been inspired by paintings and Paradiso is no exception. Layton took his cues from the colourful abstracts of Howard Hodgkin. Pyramid shapes (see above) have also been a thread throughout Layton’s work. While he has done versions over two metres high, more recent iterations are smaller and rather more compact.

Hanne Enemark’s pieces are about contrast – mixing the hard and the soft, organic forms with geometric shapes, the rough with the smooth. In Cracked Rim, for instance, she created a bowl with sharp edges that were then softened by flame before being decorated with gold lustre, a clear reference to the Japanese technique of repair, Kintsugi. She describes it (rather delightfully) as ‘pared back bling’.

Louis Thompson is one of the UK’s leading glass artists, who has exhibited in places such as Salisbury Cathedral and the RA. A former winner of the Jerwood Makers Open, his collections of bottles are inspired by his interest in collections, archiving, science and repetition. More recently he has joined forces with graphic designer and activist Sophie Thomas to create works that highlight plastic waste.

Elliot Walker is one of a handful of glassblowers focusing on figurative sculpture. Sculpting in molten glass (also know as the Messello technique) isn’t easy, requiring a combination of dexterity, speed and precise temperature control. He draws from an eclectic range of inspirations including still life painting and environmental issues. The furniture pictured here is entitled Domestic Balance.

Tim Rawlinson’s work is inspired by light’s relationship with glass, as well as architecture and his own travels, often bringing together simple geometric forms – such as cubes and triangles – with colourfully complex interiors, using a combination of blowing and casting techniques. It’s no surprise that before turning to glass, he initially studied architecture.

This content is created and maintained by a third party, and imported onto this page to help users provide their email addresses. You may be able to find more information about this and similar content at piano.io
Advertisement - Continue Reading Below
More From Design
How restaurant merch went luxury - and what to buy
Thomas Heatherwick‘s green vision of the future
Advertisement - Continue Reading Below
New home technology
Design DNA: the String shelving system
Best new storage designs to de-clutter your home
Design Heroes: Carl Auböck II & III
Pantechnicon: the best of Nordic/Japanese design
Buy retro IKEA designs at the 'Billy' archive sale
The best bespoke furniture makers in the UK
29 of the best new sustainable designs