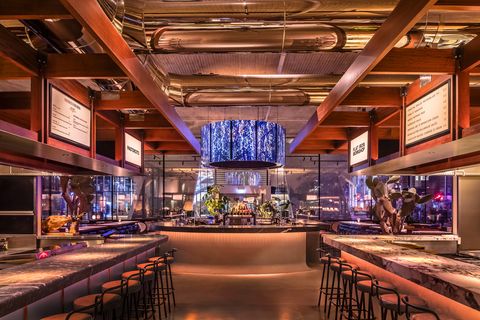 Soon after the news broke that the so-called ‘casual dining crunch’ had called time on more than 1,400 restaurants across the country last year up to June, there came a beacon of hope. The capital is (just) bucking the trend, with new gastronomic spots still outnumbering those closing their doors for good. But while the stats speak of quiet optimism, it’s not all sweetness and light on the London restaurant scene. In the past six months, we’ve seen the retirement of Hawksmoor’s sister brand Foxlow and Corbin & King’s Islington outpost Bellanger, plus the restructuring of pioneering Venetian chain Polpo.

So how to understand the puzzling picture of London’s culinary landscape? Clearly, it’s moving at lightning speed, with empty premises snapped up by restaurateurs armed with increasingly distinctive formats. ‘It’s constantly evolving,’ says the Arcade team, whose hotly anticipated Arcade Food Theatre offers outlets of foodie institutions, such as Lina Stores and Pophams Bakery. ‘There’s a need for variety as well as more dynamic, communal experiences.’

The appeal of the food hall format is obvious: it provides a safety in numbers for restaurants, which can share costs and benefit from a captive audience. For diners, they’re the ultimate champion of choice, offering a dining democracy beloved by browsers, not to mention those with tricky dietary requirements – plus they frequently have flexible all-day options.

The modern food market is often credited to New York City, where institutions like Chelsea Market, which celebrated its 20th birthday in 2017, and Italian export Eataly – a portmanteau of eat and Italy – are just two of the similar spots across Manhattan and beyond. The UK already has its fair share – including Manchester’s Mackie Mayor, Glasgow’s Dockyard Social and Leeds’ Trinity Kitchen – with innovative pop-up pioneers Boxpark and the popular Street Feast flying the flag across London.

The capital’s new breed of food hall is finding inspiration further back still, repurposing architectural heritage to create destinations that feel more like a spiritual successor to the bountiful – and beautiful – department store halls, such as Fortnum & Mason and the recently revamped Harrods. These spectacular, experiential and socially revolutionary spaces offered consumers back then a dizzying array of new-fangled delicacies as well as a now-recognised precious design heritage. Even Soho House group’s The Ned, although not a store, contains several restaurants and celebrates the historic grandeur of the former banking hall it inhabits.

It’s this combined thread that runs through a quartet of autumn’s ambitious food markets, which are located in historic buildings across the architectural spectrum. Arcade’s Macaulay Sinclair-designed space in the undercroft of London’s Grade II-listed 1960s Centre Point is a glossy affair replete with original mid-century pieces and a concrete-panelled bar to complement the modernist exterior. ‘We responded to the unique architecture of the Centre Point building,’ explains the Arcade team. And don’t miss the intention behind its ‘theatre’ moniker: ‘It's destination dining, elevated through music, art and design.’

Across town, plastic-free pioneer Mercato has spent £5 million restoring Mayfair’s once ‘at risk’ Grade I-listed St Mark’s Church to house its second outpost, while long-time street-food champions Kerb have selected 19th-century Thomas Neal’s Warehouse in Seven Dials to launch its first bricks-and-mortar venture. The Market Halls brand has finally claimed the 3,484-square-metre building vacated by BHS on Oxford Street for its cavernous new flagship. In an age when Insta-potential and an obsession with food provenance reign, the reclaiming of these spaces feels timely – these are the food courts of fantasy, and there’s much to be said for the visual appeal of their open kitchens, deli counters and displays.

In a city that values its illustrious dining institutions and beloved street markets – the bustling appeal of Brixton, Tooting and Borough – the real spirit of communal dining shines through. ‘We want to create sociable spaces that provide hubs for the whole community,’ explains Simon Anderson, chief creative officer of Market Halls. And only then will they truly do justice to the social heritage of their pioneering predecessors.

This content is created and maintained by a third party, and imported onto this page to help users provide their email addresses. You may be able to find more information about this and similar content at piano.io
Advertisement - Continue Reading Below
More From Travel
Fowey Hall Hotel is a contemporary gem in Cornwall
The best boutique hotels in the UK to book now
Advertisement - Continue Reading Below
7 new design hotels by the beach to book for 2021
The 10 best design hotels of the last two decades
Hotel Les Deux Gares brings British flair to Paris
How Skye became a destination for design lovers
West African restaurant Akoko is an earthy delight
The best rural restaurants that serve up style
Four stylish self-catering escapes to book now
The rise of the fashion restaurant