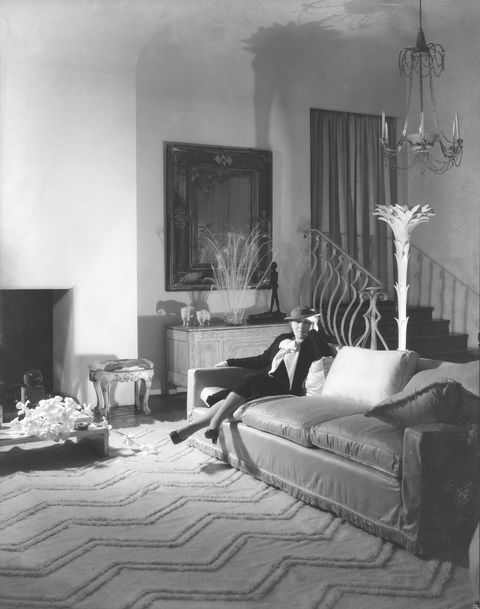 ‘With the strength of a typhoon,’ the British photographer Cecil Beaton (who took the portrait, above) wrote, ‘[Syrie] blew all colour before her... turning the world white.’ It is true that Syrie’s name has become synonymous with her glamorous, all-white interiors of the 1920s and 30s, but ‘The Princess of Pale’ was a great deal more colourful – both in her designs and her private life – than this shorthand suggests.

Syrie was only one of her birth names: Gwendoline Maud Syrie Barnardo was born in London in July 1879, into a strict but wealthy household. Her father, the philanthropist and physician, remembered today as the founder of the charity Barnardo’s, was a committed evangelist – and a childhood diet of daily Bible reading, punctuality and stringent self-denial did not have the intended effect.

Syrie grew up to be a fashionable socialite with a taste for fine clothes, rich food, champagne and bad marriages. Her second of the latter, to the writer William Somerset Maugham, gave her the surname by which she is remembered, and it was, by all accounts, miserable. He was in love with someone else, resented her spendthrift habits and could be controlling and cruel, while she had a temper, a sharp but under utilised brain, as well as an acquisitive streak.

Screens were ruthlessly stripped of lacquer; sofas and chairs were reupholstered in pale velvets

It was perhaps lucky for them both then that Syrie discovered her passion for interior design. She apprenticed herself to a decorating firm to learn the finer points of furniture restoration and trompe l’oeil, and in 1922, aged 42, opened her first shop on Baker Street with £400 loaned from friends, despite her husband’s disapproval. The shop, and her inimitable style, was a sensation.

In part, her success was because she was so bold and fresh. Victorian and Edwardian schemes were heavy, dark and well-filled, relying on florid contrasts and stylised florals. Syrie, however, valued space, light and neutral tones. Her treatment of antiques also made her notorious with traditionalists. Coromandel screens were ruthlessly stripped of their dark lacquer; varnished tables and chests were bleached, ‘pickled’ and repainted; sofas and chairs were reupholstered in pale velvets and modern prints.

She had an intuitive sense of the importance of publicity, too. Her famous all-white music room, with its fluted mirror walls, was unveiled at a candlelit party in 1927. She cultivated an exclusive and expensive clientele – Noël Coward, the Duke and Duchess of Windsor, American socialite Mona von Bismarck and Italian fashion designer Elsa Schiaparelli– and conquered the American market, opening more shops in New York and Chicago.

This content is created and maintained by a third party, and imported onto this page to help users provide their email addresses. You may be able to find more information about this and similar content at piano.io
Advertisement - Continue Reading Below
More From Decorating
Decorator Index: Pamela Shamshiri
William Morris and a love of all things green
Advertisement - Continue Reading Below
10 timeless colour schemes from the FENIX range
Created by
FENIX
Nathalie Du Pasquier wants you to rethink tiles
Holloway Li's sustainable approach to interiors
Oliver Gustav’s minimalist Christmas style
Diana Vreeland and her love affair with red
15 creative Christmas decorating ideas
How to light your home – tips from the experts
Lucienne Day's love of uplifting mustard yellow