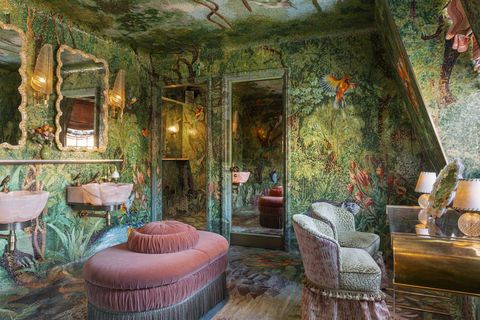 Loos in the Mews at Annabel’s by Martin Brudnizki, Photography James McDonald

In days gone by, the focal point of a hotel, bar or restaurant interior would probably be exactly where you’d expect – the central space, where every visitor could share the sense of wonder. Back then, the bathrooms would have rarely got a look-in. But ever since the 1990s, restaurant revolution designers have steadily grown more inventive with restaurant loos. And now, with our Instagram obsession, the humble water closet is sometimes the best room in the house. Suddenly every nook and cranny is under pressure to look camera ready – but today’s WCs also serve a different purpose, tapping into our desire to have a more intimate experience with our surroundings.

In London, Conran Restaurants were the first to raise the loo game. Quaglino’s men’s bathroom, with its black glass urinal and marble trough basins, made the news when it opened in 1993. Then in 2003, Mourad Mazouz’s Sketch in Mayfair became the capital’s ultimate trailblazer, with its futuristic unisex podscape. Both these giant egg-shaped loos, and the Swarovski bejewelled closets upstairs, became the stuff of legend, and others followed suit.

Among them are Soho restaurant Nopi, where diners are greeted by a hall of mirrors, and Isabel in Mayfair, where the discreet dining ambience contrasts with extravagant washroom décor: think hand-painted Chinoiserie wallpaper by de Gournay and exotic marbles inks.

There’s also The Ned, whose chequered marble floors and velvet love seats are reminiscent of old-fashioned ocean liners, and Martin Brudnizki’s masterful revival of Annabel’s – with its pink onyx basins and flower-strewn ceiling in the Powder Room that aim to make your washroom visit ‘an experience rather than a necessity’, says the designer.

It even has a dedicated make-up station. Following the popularity of this space the club has just unveiled the Loos in the Mews (pictured top) on the third floor, similarly escapist with an immersive jungle-like interior decked out in four million pieces of mosaic glass.

But why single out loos, as opposed to any other space? ‘It’s partly about the way we use them,’ says Alexia Bradford, The Ned’s interior designer. ‘You don’t spend as much time in a bathroom compared to the rest of a hotel or restaurant, so people are braver about going for strong elements,’ she suggests.

Loos at the Mews
Loos in the Mews at Annabel’s by Martin Brudnizki, Photography James McDonald

Small spaces also benefit from flamboyant injections of colour and pattern, where the light doses required rarely overwhelm. ‘Because the bathroom industry is booming, designers have the freedom to create more exciting spaces,’ adds Bradford. ‘Tiles, taps and basins have evolved to embrace multiple finishes, colours and shapes.’

The unintimidating scale of these spaces, combined with the sheer creativity on display, has inspired a trend for bolder home bathrooms. For example, Brudnizki’s design for the loos at Selfridges’ Brasserie of Light, clad entirely in pink marble and mirrors, could easily be adapted to glam up a poky guest bathroom.

Likewise, The Hoxton Holborn, where the classic black-and-white-tiled look is reimagined with op-art intensity. Small, windowless spaces invite new experiments with pattern and finish: the glossy plum ceilings and Ikat-print wallpaper at the Suzy Hoodless-designed members’ club AllBright, perhaps, or the wild jungle pattern that trails across the washroom ceiling at Restaurant Ours in Knightsbridge. You don’t need to go bright to make an impression, either. Witness Clos Maggiore in Covent Garden, where an all-grey palette makes Toile de Jouy wallpaper and marble floors dazzle.

The best designs create a bathroom worth lingering in. Claridge’s, with its beautiful art-deco powder room featuring flattering Hollywood-like mirrors, and The Ritz, with its couches, floral displays and trompe l’oeil murals, are the ultimate in languorous self-pampering. Meanwhile, at the Henrietta Hotel, twin sinks and complexion-flattering pink walls make for a recreational vibe. Why would you ever want to leave?

Related Story
How to plan a statement bathroom