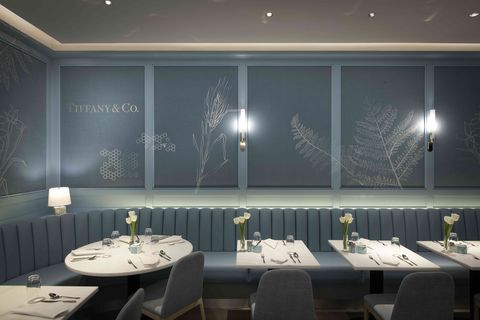 Window shopping at Tiffany’s Fifth Avenue always seemed a slightly strange antidote to the ‘mean reds’ – Holly Golightly’s memorable phrase for modern life malaise. Audrey Hepburn looked all very soigné in her LBD and pearls, takeaway coffee in hand, but wouldn’t you rather sit down, somewhere beautiful, with a nice cup of tea? Well, now there really is a real-life place that would calm anyone down right away. Calling all romantics, Audrey Hepburn and Truman Capote fans, you can now actually have breakfast at Tiffany’s, albeit in London rather than Manhattan.

The iconic New York jewellery brand has just opened Europe’s first Blue Box Cafe at Harrods, located on the lower ground floor it comes complete with its own independent entrance on Hans Road. The intimate 45-cover interior conceived by Mark Pinney Associates, echoes the original cafe at the flagship store in New York, an elegant vision of that distinctive Tiffany Blue with silver and chrome accents it features acoustic-softening fabric panelled walls and an exquisite Amazonite marble back bar and white Bianco Batola marble table tops – maintaining the ‘quietness and proud look’ that Golightly so admired.

Set below a gleaming silver leaf coffer, it’s all fiercely on brand with a mellow New York jazz soundtrack, silver jewellery-inspired motifs painted on the fabric walls by artist Hugo Dalton, slender illuminated ‘windows’ showcasing jewellery and the menu served on trademark Tiffany ‘Color Block’ bone china (which you can buy), bearing a fetching half white, half blue design.

As for the breakfast (served 8-11.30am), well, it’s doubtful Golightly ate much, but here you can tuck into a Manhattan-flavoured menu with square shaped croissants modelled on jewellery boxes, a fruit salad delicately infused in lime and mint and classics like avocado on sourdough. Executive head pastry chef at Harrods, Markus Bohr has clearly had fun devising the creative menu, the undoubtable stars of which are likely to be The Big Apple and The Tiffany’s Bird Nest, served as part of the afternoon tea.

The former is Bohr’s reinterpretation of the apple pie, resembling a jewel-like miniature apple it’s bound to elevate this American staple to Instagram star status in the same way Heston’s Meat Fruit brilliantly reinvented chicken liver parfait. ‘I was thinking how I could possibly create a beautiful apple pie, and then I had an epiphany,’ he said at the breakfast launch. His epiphany at Tiffany’s also generated The Bird’s Nest, which resembles a delicate Robin’s egg, paying homage to origins of the brand’s livery. So follow Golightly’s advice, jump in a cab to the Tiffany’s Blue Box Cafe, because it’s surely an understatement that ‘nothing very bad could happen to you there’.

The Tiffany Blue Box Cafe is at Harrods opens 14 February. For bookings for breakfast, lunch or dinner, visit Tiffany 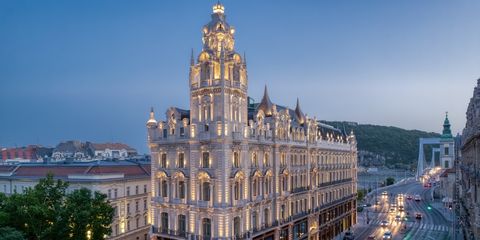