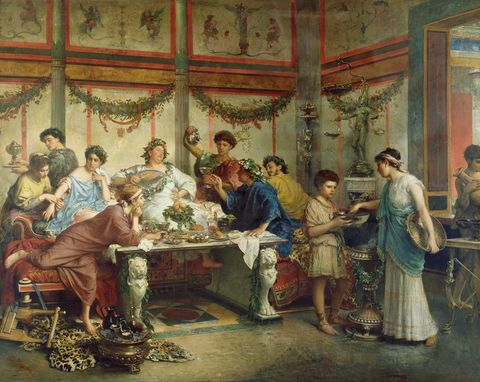 Break Christmas down into its component parts and it’s hard not to come to the conclusion that early Christians did an awful lot of borrowing from older, pagan traditions. The evidence may not be concrete, but it is compelling. The mid-winter date coinciding with winter solstice? Garlanding a tree with lights? Hanging up sprigs of mistletoe? The abundance of rich food and exchanging of gifts? And then, of course, there’s the holiday’s glossy green and red livery.

Saturn, an old Roman god of agriculture, was thought to have ruled over the world in a long-lost Golden Age of plenty and was celebrated with gusto throughout the empire in late December. Saturnalia, according to the early fifth-century writer Macrobius, was a time when ‘all things serious are barred’, and it’s from this holiday that people have argued many Christmas traditions were taken. During Saturnalia, masters served their slaves at banquets, games of all kinds would be played and public chariot races held. Lavish feasts would be laid on at Saturn’s temples, most famously the Forum, which was also Rome’s state treasury where branches of dark green holly spiked with scarlet berries were used as decoration. Although it’s impossible to be certain, it seems it is to these boughs that we owe the Christmas palette of today.

So successful in grafting itself onto Christmas festivities, it’s difficult now to put them together without thinking of twinkling lights, the smell of roasting chestnuts, the crackle of wrapping paper and mince pie crumbs. It helps that these colours are complementary, opposites on the colour wheel, which means that when placed next to each other, red and green create a zinging contrast. This makes the combination particularly eyecatching – a good thing when decorating for a festival– but it also works on a symbolic level.Christmas, like Saturnalia before it, marks a temporal tipping point: the end of dark’s suffocating encroachment and the rebirth of light. Red and green, with their strong contrast, clearly delineate the move between the old part of the year and the new.