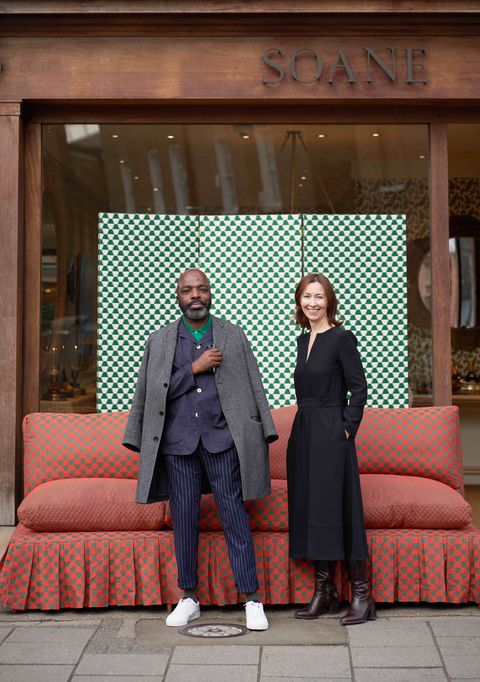 The two discovered a mutual admiration after Olowu posted a snap of Soane Britain’s Pimlico Road window display on his Instagram account. ‘He loved its bold use of one fabric on everything – walls, furniture and lampshades,’remembers founder Lulu Lytle, who for her part adores Olowu’s ‘irreverence’ and ‘fearlessness with colour and pattern’.

Having established a passion in common, the two began a conversation about a furnishing fabric range. ‘An interest in similar historical references set the direction of travel, from ancient Egypt to Arts and Crafts homes and 1940s photography,’ explains Lytle. The designs they finally settled upon – four in total, including two prints and two weaves– are a mix of punchy modern geometrics and more whimsical vintage styles.

‘Timbuktu’ is an eye-popping triangle weave that comes in deep greens and rhubarb pinks, inspired by the decoration of centuries-old mosques in Mali; it works perfectly alongside ‘Koro’, which is similar but on a smaller scale, as a chic pattern pairing. The printed fabrics area softer contrast in pretty pink and sky-blue shades. ‘Georgian wrought ironwork inspired the “Regency Swirl” design, while the wonderful topiary of the English Arts and Crafts gardens at Hidcote Manor influenced the silkscreen-printed “StencilLeaf” textile,’ says Olowu.

Paired with the historically influenced shapes of Soane Britain furniture – the ‘Tuileries’ sofa with its frill skirt, or the ‘Osiris’ sofa with its fretwork rattan base – the range makes a delightfully piquant contrast. ‘Both Lulu and I have a deep respect for how things are made, and our standards of craftsmanship are very high,’ Olowu reflects. ‘I love Soane’s fresh take on timeless, old-school ideas about interior design; it’s chic, yet practical and unfussy.’

As for how the prints are intended to be used, it’s about letting your creativity run free. ‘As a designer, I’m known for juxtaposing different patterns, and the idea is the same here– you can combine contrasting upholstered pieces in the same room to bring it to life,’ says Olowu. ‘The collection adds character and joie de vivre to even the simplest home. I want people to be fearless and confident in their choice of prints and the way they’re mixed – they won’t overwhelm your space, hopefully they’ll just make you long to return to it.’ Fabrics from £140 per metre. soane.co.uk; duroolowu.com

This content is created and maintained by a third party, and imported onto this page to help users provide their email addresses. You may be able to find more information about this and similar content at piano.io
Advertisement - Continue Reading Below
More From Decorating
6 easy ways to add drama and impact
Created for From ELLE Decoration for Created by ELLE Decoration for
DFS
Interior design studio Echlin on craft in the home
Advertisement - Continue Reading Below
The essential guide to garden lighting
Liberty’s new home fabrics and wallpapers
The big guide to decking, garden tiles and more
The ultimate guide to bi-fold doors
Saison International turns modern art into fabrics
The ultimate guide to exterior paint
Colour theory: a spectrum of decorating ideas
A guide to terrazzo: everything you need to know