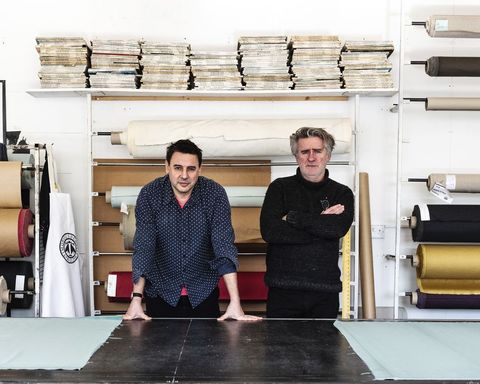 Bank notes, Claridge’s, whisky, an aeroplane tail fin, chocolate wrappers, carpet and KateBush. It’s a varied list in which one might find it tricky to spot a common thread, but it’s just a small selection of the many projects, people and products that design studio Timorous Beasties has worked on or collaborated with over the past three decades. Such incredible versatility has allowed founders Alistair McAuley and Paul Simmons to expand and nurture their multi-award-winning company, which is more commonly known for its bold, intricate and sometimes macabre wallpaper and fabric designs, since it was founded back in 1990.

'Seaweed Column’ wallpaper in ‘White’ from the new ‘Oceana’ Collection, £140 per m

A new collection, ‘Oceana’, debuted at Paris Déco Off in January and, with its colourful crustaceans, feather-like corals and ever-so-slightly menacing eels, it’s the latest addition to an expansive portfolio that totals around 160 designs. ‘We’ve been developing it, on and off, for the last three or four years, and it’s the first time we’ve launched an actual “collection” with different designs,’ says Paul. ‘We’ve used thinly sliced cork as a new substrate and, going forward, we’re sampling prints on recycled fabric. There are baroque takes on shells and seaweed, and the large eel pattern was an idea from almost 30 years ago, but the technology available today, including digital printing, makes it so much easier to produce.’

Technology was not as widely accessible when the pair met at Glasgow School of Art in 1984, or when they launched the business from a disused church six years later. Paul is quick to point out that although it’s become another tool in their design box, much of what they do remains truly analogue. ‘We’ve always used technology to our advantage, and we may wells can things into the computer and colour them up,’he explains, ‘but our core values remain around drawing, and the process is still highly skilled yet very basic in that it starts with pen and ink.’

Trained as printed textile designers, Alistair andPaul’s move into wallpaper was an economic necessity, with experimenting on paper a less expensive way to get their ideas seen. ‘It cost a fortune to print on fabric and get anything into production,’ says Alistair. ‘I’d worked at a wallpaper factory while studying and we used to print on the offcuts. When we started, pattern was considered a terrible thing – you could say it was a minimalist heyday – but this was a continuation of our work at art school. We were producing exactly what we wanted; the more subversive side of pattern making, which was something we found interesting.’

Much of their inspiration comes from the printed image – old etchings, engravings, copper plates and lino cuts – which is evident in their contemporary toiles and instantly recognisable ‘Omni Splatt’, ‘Blotch’ and ‘Kaleido’ designs. ‘I guess we both have the same irreverent approach, and the same desire to do something different and beautiful,’ says Paul. ‘The first 10 years were hard; our products didn’t fly off the shelves. We did any work we could, from printing T-shirts to creating backdrops for The Late Show, T in the Park and Spitting Image, who tracked us down via a magazine. There were also some dark moments and, at times, we thought maybe we should do something more commercial, but we realised we had a niche and had to lock ourselves in. Making that decision worked for us.’

'Little Thistle' being printed at the Glasgow studio

With early designs such as ‘Iguana’, ‘Thistle’ and‘Napoleon Bee’ still selling decades later and, with shops in Glasgow, London and a new Berlin showroom that opened last year, that decision continues to serve them well. Next up is a Glasgow-based retrospective of their 30 years in the business, as well as a book, a second leatherwork project with Bill Amberg Studio, and a collaboration with Fürstenberg porcelain. ‘Because we’re small, we’ve been able to adjust to situations, and to survive even when we were almost broke,’ says Alistair. ‘At the end of the day, we utterly believed in the product, so it’s always worked out and there’s still masses to be done.’ timorousbeasties.com

This content is created and maintained by a third party, and imported onto this page to help users provide their email addresses. You may be able to find more information about this and similar content at piano.io
Advertisement - Continue Reading Below
More From Decorating
5 tips for creating flamboyant interiors
Created for From ELLE Decoration for Created by ELLE Decoration for
Archive By Sanderson Design
Made of Matter turns scraps into vibrant wallpaper
Advertisement - Continue Reading Below
Minimalism is back – but is less always more?
6 ways to update your staircase
Creating interior couture with design firm Elicyon
How to design a room around artwork you love
The expert guide to starting an art collection
Why creatives are turning to West African textiles
How to display art: a practical guide
The best modern prints for a stylish gallery wall