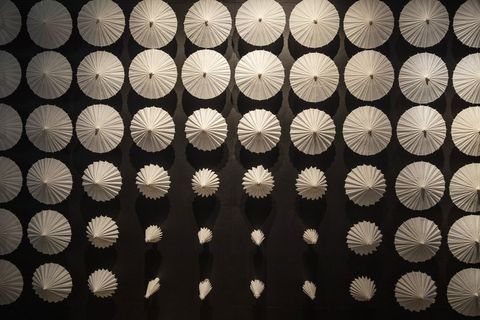 It’s almost unfathomable that China, the second largest economy in the world, with a population of 1.4 billion, is at an early stage of development in any field. And yet, for all the country’s economic and technological power, its product and furniture design scene was almost nonexistent until recently. ‘China had a lack of design culture and history,’ explains Sugar Lee, deputy features director and digital content director of ELLE Decoration China. ‘Just ten years ago, we were thought to have no design scene at all.’ That opinion is being quickly reversed.

‘Chinese design today is like many flowers blooming together’

This change in fortunes is thanks to the government’s ‘Made in China’ initiative of 2015, which pledged to reposition the country as a design superpower by 2025. The aim was to distance itself from the reputation of being ‘the world’s factory’ and emerge instead as a high-end manufacturer of quality products. Almost £2 billion was invested to support the creative industries. Previously, the norm for young Chinese designers was to study and set up practices overseas, but thanks to this new support, creatives are returning home, bringing global influences with them.

The effects of these advances can take time to trickle down, but this year it felt as though the design world’s spotlight had swivelled east. China’s rise is gathering momentum.

Pioneers of this new wave are Shanghai- and London-based Neri & Hu, one of the country’s most successful exports – the creative directors of furniture brand Stellar Works are, so far, the only Chinese winners of Designer of the Year at the annual ELLE Decoration International Design Awards (in 2017). The pair were guests of honour at this year’s Stockholm Furniture Fair and Canada’s Interior Design Show Toronto.

Word of China’s design revolution was also on the lips of those at Maison & Objet fair in Paris, where six Chinese creatives were singled out for its Rising Talent award. ‘Chinese design today is like many flowers blooming together,’ says Fan Zhe, curator of a showcase dedicated to Chinese creativity of the past, present and future at the Design Biennale in Saint-Étienne. ‘The country is producing outstanding work, and there’s a huge demand for its individual pieces.’

‘China has established itself as a major international player in design over the past five years, with the culture shifting towards innovation and originality,’ says Zhuo Tan, director of Design Shanghai. A relative newcomer on the design show circuit (launched in 2014), the event has flourished; this year it will play host to over 400 brands from 30 countries. ‘When we launched, we found only a handful of Chinese participants who were dedicated to furniture. In 2019, we had 60 brands – it shows how quickly China is absorbing the movement. The world is looking to us. It’s an exciting moment!’

But what of the ‘Made in China’ label that came to signify mass production and low quality? While Chinese architects were able to prosper thanks to rapid urbanisation, the design sector had remained weak. ‘There was no concept of brand, and no willingness to pay for independent creatives,’ explains ELLE Decoration China’s Lee. Designers were often imported, or looks simply copied. The recent boom is seeing those negative connotations turned on their heads. Now, the country’s infrastructure of incredibly efficient factories can be regarded as a huge advantage, with original designs able to be developed and produced at a fraction of the time and cost of that in the West.

There is now an ever increasing group of young furniture makers, all hungry for their slice of the global interiors pie. ‘Many of them,’ say Neri & Hu, ‘see the Chinese stereotype of mass production as the driving force to do better. They’re striving to be more inventive to reverse this negative view’. The results are noticeable and, according to Zhe: ‘Forming a visual language that’s contemporary and characterised by our Chinese heritage is only a matter of time.’

Before founding Shanghai-based Urbancraft in 2016, Li worked for designers Andrea Branzi and Luca Trazzi in Italy, and spent six years as Neri & Hu’s chief designer. Inspired by Chinese heritage and Italian icons, such as Gio Ponti and Carlo Scarpa, his brand incorporates historic references into contemporary pieces – take the ‘By 3’ storage system (above), which fuses interlocking sections of glass, terrazzo and marble. And the future is bright: ‘Italian and Nordic firms are already talking with us about collaborations,’ he says (urbancraftdesign.com).

‘Free and imaginative’ is how Sherry Xu describes the work coming out of her studio, 8 Hour, which she founded in 2016 after graduating from the Shanghai Academy of Fine Arts. Her pieces are inspired by everyday life; the new ‘Clips’ seating collection references the changing shape of the paperclip, with rounded upholstered pieces held on a looping steel frame. It can be seen at WeWork shared offices across Asia (8hourdesign.com).

Growing up in Beijing and working in Europe has informed the distinct east-meets-west aesthetic of the eponymous Frank Chou Design Studio, established in 2012. Chou’s ‘Middle’ chair is a highly modern take on traditional bamboo seats, while the ‘Combo’ modular system is a reinvention of historic upholstery techniques, using wool, leather and a mixture of other fabrics. ‘As designers, we have a strong responsibility to lead, teach and fight for a better future,’ says Chou (frankchou.com).

Tsai founded his Hangzhou studio in 2014, and his minimal style, with its small, poetic details – realised in monochrome and natural materials – has brought him to the attention of Chinese and European brands alike. He’s lent his simple, rounded forms to Danish firms Ferm Living and Woud, Oslo-based Northern and Italian lighting giant Flos, as well as several Chinese companies (mariotsai.studio).

Focusing on traditional Chinese materials to distinguish his pieces from mass-produced fare, Furong Chen was named Emerging Chinese Designer at Design Shanghai in 2015, just one year after founding his own brand, Wuu. Citing inspirations including Ronan & Erwan Bouroullec, Konstantin Grcic and Donald Judd, the studio has already collaborated with French-Chinese brand Maison Dada on the ‘Looking for Dorian’ mirror , and creates lighting, furniture and accessories (wuu.im).

This article first appeared in August 2019 issue of Elle Decoration

This content is created and maintained by a third party, and imported onto this page to help users provide their email addresses. You may be able to find more information about this and similar content at piano.io
Advertisement - Continue Reading Below
More From Design
Treasured: John Booth on his favourite possession
Gubi’s launches are new dinner party favourites
Advertisement - Continue Reading Below
Hit refresh on home office tech
33 of the best designer sofas to invest in now
Expert advice: how to future-proof your home
The homeware and design shops in London and beyond
Kettal’s reimagining of the open-plan workplace
23 home office buys to perfect your WFH style
Toogood and Birkenstock collaborate on a new range
Wellness bathroom: how to create a home spa