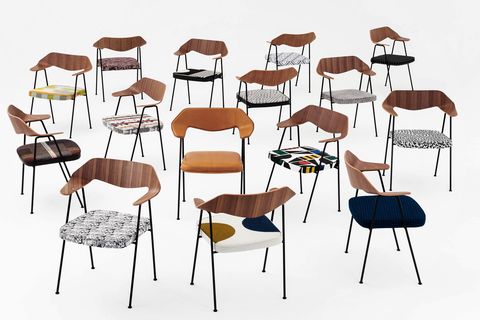 Stroll past the Heal’s flagship store on London’s Tottenham Court Road from 1–21 August and you will spot 15 new versions of Robin Day’s iconic ‘675’ chair in its windows. It’s all part of ‘A Day to Remember’, a new project organised by Case Furniture and the Robin and Lucienne Day Foundation. The good news is, all of the chairs will be available to buy at auction and all of the money goes towards supporting young British designers.

The 15 talents invited to pay tribute to one of Britain’s greatest designers by providing new upholstery fabrics for one of his most recognisable pieces include some of the biggest names in textiles. Indeed, whatever your interior style there’s a ‘675’ that will suit you.

Robin Day was convinced that good design had the power to improve people’s lives, and by reimagining his famous chair, originally designed in 1952, his work has the ability to continue doing that in a way that even he himself would not have imagined. Today, the Days’ legacy lives on through the work of the Robin and Lucienne Day Foundation, a design education charity set up by the couple’s daughter in 2012. As well as running an Awards programme for design students, the Foundation collaborates on educational projects and is developing a digital archive which is an important resource for exhibition curators, design historians and writers.

Bidding on these one-of-a-kind pieces will be open for three weeks, starting from 1 August, and the proceeds will have a real effect on young designers starting out in the UK today. As Paula Day, daughter of Robin and Lucienne Day and Chair of the Robin and Lucienne Day Foundation said: ‘We represent the work of two of Britain’s greatest 20th-century designers and are dedicated to carrying their design legacies forward into the future, enriching the lives of generations to come and inspiring the great designers of the future.’

Enter the competition to win one of the chairs: casefurniture.com/win-a-675-chair