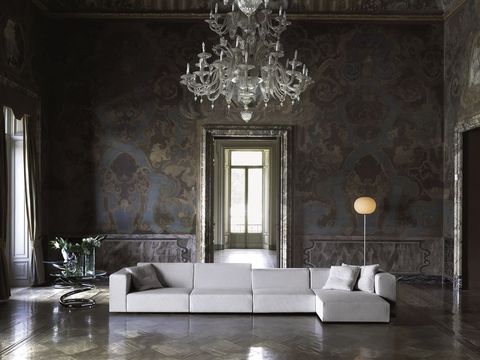 Founded in Milan in 1969 by husband-and-wife team Luigi Bestetti and Renata Pozzoli, Living Divani credits ‘a fixation on contemporary design and a touch of luck’ for its success. It was at just 26 years old that Bestetti decided to strike out from his family’s traditional furniture company and forge the modern brand we know today. Still honouring the principles that it established 50 years ago – elegant silhouettes and a considered colour palette – it’s now just as celebrated for its creative collaborations and the ageless outlook that’s allowed it to traverse half a century with ease.

‘I PUSHED THEM TO BE MORE CONTEMPORARY AND, LUCKILY, THEY BELIEVED IN ME AND MY CRAZY IDEAS’

Bringing Italian design maestro Piero Lissoni on board in 1989 – a partnership that’s celebrating its own anniversary of 30 years – was a pivotal moment, solidifying Living Divani’s unique style. ‘I’ve seen the company completely transform,’ says the designer, who, upon joining the brand, set about overhauling its factory in Como, which opened in 1974, updating its materials and reimagining its visual identity. He also created some of the most iconic Living Divani pieces, such as 1995’s ‘Frog ’ chair, now considered a forerunner to the subsequent vogue for low seating, and the ‘Wall’ sofa of 2000, which was the brand’s first design without legs. ‘I pushed them to be more contemporary and, luckily, they believed in me and my crazy ideas,’ he says.

Collaboration has been a mainstay of the firm’s identity, thanks in no small part to the vision of the founders’ daughter, Carola Bestetti, who joined the firm in 2004. The roll call of those who have contributed to the portfolio is a who’s who of the design scene – Arik Levy, Claesson Koivisto Rune, Giopato & Coombes, Nathan Yong, Victor Vasilev, Shiro Kuramata, Junya Ishigami and Lanzavecchia + Wai, to name but a few. Each designer is specially chosen for their ability to harmonise with the brand’s clean-lined aesthetic.

Luigi Bestetti, Renata Pozzoli and Carola Bestetti, sit on the 'Metro 2' sofa designed by Pietro Lissoni for Living Divani in 1999

At 50 years young, Living Divani continues to uphold its global reputation for creating fine furniture, with a range that now spans the entire home. For 2019, it has partnered with another impressive array of designers, both new and established, including David Lopez Quincoces, Keiji Takeuchi and Shibuleru, plus, for the first time, young Italian Leonardo Talarico, Milan-based Studio Klass and New York’s Stephen Burks. Of course, Lissoni has contributed too, with ‘The Uncollected Collection’ (chaise longue, right), a limited-edition range of chairs and tables that are part furniture, part sculpture. What now? ‘On to the next 50 years!’ says Lissoni. livingdivani.it