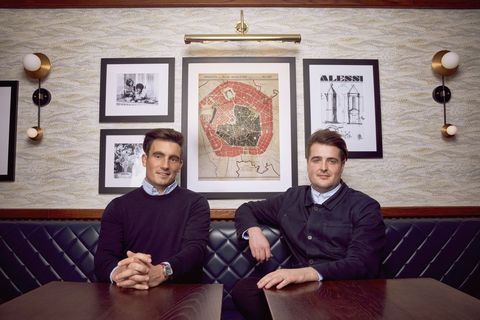 In just six years, and only a little over a decade since graduating with university degrees in interior architecture, Andy Goodwin and Tom Parker are taking the global restaurant design scene by storm with their agency, Fettle. It’s a long-distance partnership – Parker is based in LA, and Goodwin heads up the studio in Shoreditch – but they remain close. ‘Tom and I talk most days – actually, I speak to Tom far more than I speak to my wife,’ laughs Goodwin.

Fettle is a word used in the north of England, meaning ‘to tinker with’, and the name is an ode to Goodwin’s south Yorkshire roots. It perfectly embodies the pair’s ethos. ‘A lot of what we do is rooted in tradition–revering a building’s past,but then twisting the fabrics and finishes to add modern or unexpected details,’ he says.

Recently, the firm has been working on projects from the cocktail bar at The Marylebone hotel and the new Moncks of Dover Street brasserie in Mayfair (above) to the communal drinking, lounging and dining areas of The Hoxton hotels in Portland, Oregon and soon-to-come Rome. In LA, they’ve overseen restaurants such as Audrey at the Hammer Museum establishment, and, more recently, The Draycott in Pacific Palisades, for British restaurateurs Matt and Marissa Hermer, with whom Fettle is also working on another restaurant on Melrose Avenue. Where their colour palette in the UK comprises chiefly oxblood reds and royal blues, stateside, in spaces like The Draycott, the Californian light has afforded ‘a looser, unexpected freshness with shades of pink, orange and palm green,’ says Parker.

As alumni of Martin Brudnizki’s design studios in both London and New York, it’s also no surprise that the duo’s style focuses on the well-considered and luxurious. ‘One of our pet peeves is walking into a restaurant or hotel and not knowing where to go or how to use a space,’ says Parker of their aim to create ‘inviting and intuitive schemes, where we plan the flow extremely carefully.’

There is an emphasis on layering, too, especially with custom-designed finishes, furniture and lighting. ‘At Moncks, for example, it’s the subtle details – like the pleated fabric covered walls and the tassel-trimmed cushions, glazed Anaglypta ceilings and marble flooring – which have created depth,’ explains Parker.

Inspiration comes from everywhere, including old-school brasseries and 1950s Italian design – ‘the heyday of Gio Ponti et al,’ says Goodwin – and the current work of the designers Studio Modijefsky in Amsterdam and Roman and Williams in New York. As Goodwin puts it: ‘We’re lucky that our studio is still small enough, and our clients are relatively open, so we can be quite adventurous with what we’re doing’. fettle-design.co.uk