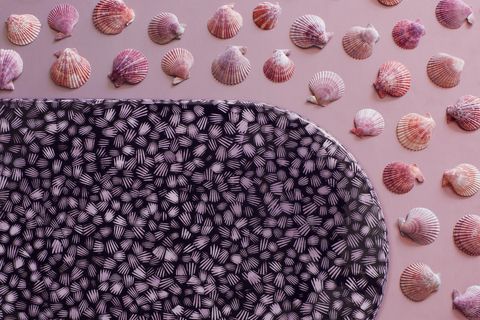 Mushrooms. Turmeric. Corn husks. No, not a vegan meal, but just a few of the raw ingredients designers are harvesting to form surfaces, textiles, objects and furniture. The interiors world is responding to the climate crisis by reframing our relationship with nature. As intuitive problem solvers, designers should, logically, be the vanguard of material innovation. And in the process of hunting and gathering sustainable, earthly and bio-based waste materials to use in their work, they’re pioneering a new aesthetic– let’s call it organic luxury.

Closely interwoven with the crafts renaissance, this approach is surely symptomatic of our growing obsession with the provenance of everything we consume – from food to homeware. With high-profile figures such as sailing legend Ellen MacArthur calling on designers to help shift the world towards a circular economy, increasing numbers of creatives are attempting to utilise the earth’s resources in eco-friendly ways, with minimal impact.

Some makers have, of course, been thinking this way for a while; ahead-of-the-curve creative pioneer Jasper Morrison developed a family of cork stools in 2004 for Vitra. How timely that he revisited the project this year by showing an expanded limited-edition range (above) at the Kasmin Gallery in New York City.

Another contemporary who is innovating in a similar way is Bethan Gray. Her recent ‘The Exploring Eden’ furniture collection is exquisite proof that sustainable design doesn’t always have to aesthetically scream ‘eco’. The pieces feature elegant enigmatic surfaces composed from discarded feathers and shells and were produced in collaboration with Nature Squared, a company founded in 2001 with the aim of repurposing natural waste materials for the luxury market.

And in London right now, several exhibitions shine a spotlight on the key figures and new mediums shaping this design landscape.‘Crop’, a ‘sensory exhibition’ curated by the Sarah Myerscough Gallery at its Barnes-based HQ, features the groundbreaking work of nine artist-designer-makers with collectable objects and furniture formed from ingredients such as wheat, corn, sisal, willow and jute. There is also work by two of the undisputed poster stars of this new movement, Sebastian Cox and Fernando Laposse (above).

‘The beauty lies in the imperfection of human touch’

The former – home-grown champion of British woodland and recent publisher of the manifesto Modern life from wilder land – has handcrafted thatched bread baskets of heritage wheat that resemble dried floral displays. The latter – London-based designer Laposse – is the creator of ‘Totomoxtle’, a corn husk and paper-backed veneer made in 2016 with the help of women from his native Mexico, which can be adapted for richly toned wallcoverings or marquetry for furniture. For ‘Crop’, his extraordinary hairy sisal benches and tables call to mind the work of the Campana Brothers, who in their improvisational, eco-aware approach can be considered the revolutionary godfathers of this ethical movement.

Making like this is a political act, something that has been lacking, not just in the design industry but in a wider generational context. But times are definitely a-changin’. ‘Artist/makers are responding o the political issues around us and our concerns for the natural world,’ says Myerscough, who has long specialised in curating artists and designers of this kind, such as Joseph Walsh and Gareth Neal.

‘They feel a responsibility to connect their audience back to nature and reveal the essence of the material. There is an overriding desire to protect the processes of making with organic mediums in our technological world and reinvigorate contemporary craft so it remains vital. Artist/makers have an emotional and psychological attachment to these substances, which is ultimately sensual and primal.’ At this year’s ‘Design Miami’, Myerscough exhibited Marcin Rusak’s ‘White Perma’ (above) furniture collection, the pieces of which are composed of discarded flowers and grasses suspended in resin (it’s worth noting the polyester resin is not yet fully bio, but manufacturers are working on this) to resemble fossilised forms.

Over at Somerset House, meanwhile, the material possibilities of mycelium – the fine hyphae that form the main structure of a fungus– in architecture and design are being investigated as part of an ambitious exhibition exploring the legacy and potential of our favourite forest staple. ‘Mushrooms: The Art, Design and Future of Fungi’ (until 26 April), curated by Francesca Gavin, is diverse in scope but a section dubbed ‘Fungi Futures’ projects forwards, contemplating how this bio-based matter might play a significant role in shaping a more sustainable world.

Pieces composed of mycelium and green wood waste are presented by Sebastian Cox and Ninela Ivanova (above), while intrepid architecture technologist, Mae-ling Lokko, imagines a greener future with her ‘Hack the Root’ installation (above), which displays an architectural structure grown from agrowaste-fed mycelium panels. Tom Dixon is designing a chair fabricated from a fir-like composition of mycelium and wheat chaff, manufactured from a mould by Esher-based firm Symbiotec. ‘It will look vaguely grown and mushroom-like,’ he says, adding, ‘and the production time is really, really fast. The big issue, though, is how to scale these things up so it’s affordable, as most consumers aren’t willing to pay more for sustainable design.’ This perhaps explains why the luxury sector is currently leading this movement.

No stone is left unturned in this quest to explore the possibilities of the botanical world – even algae is under the microscope. Since 2016, Arles-based think tank Atelier Luma has been exploring the plant’s potential as a bio-material for architecture with the AlgaePlatform. You can experience their ‘laboratory’ at the Royal Academy’sArchitecture Studio, an installation alongside the ‘Eco Visionaries’ exhibition. But if this all feels a little out there, more tangible ways to enjoy the fruits of the earth are also available closer to home.

Some designers are simply returning to age-old methods that are gentler on the planet. Organic dyes go back several millennia, but are becoming increasingly popular in the production of home textiles. New artisanal companies such as New York City’s Thompson Street Studio, Bristol’s Botanical Inks and Stemwell Workshop in London – all established in the past five years – are focusing on plant-based dyes. British rug designer Luke Irwin recently produced his first collection with patterns created entirely using vegetable extracts, as opposed to the chrome-based chemical dyes that have been in use for the past century. Cayenne creates red, indigo makes blue, turmeric yellow and so forth, with the ingredients printed on the rug’s underside like a recipe for the design.

Irwin is excited about this new direction, which is in addition to his standard rug collections, but he feels that the consumer may need re-educating. ‘As a custom house, people often want exactly what they have asked for, but it’s not possible to be quite so precise with natural dyes. They do tend to fade, like antique rugs,’ he says.‘However, I believe that with anything handmade from natural materials, the beauty lies in the imperfection of human touch and the evolving patina over time.’ And judging by the rise of craft and the dawning of this new era, it would appear he’s not alone.

This content is created and maintained by a third party, and imported onto this page to help users provide their email addresses. You may be able to find more information about this and similar content at piano.io
Advertisement - Continue Reading Below
More From Design
Former Gucci designer Gergei Erdei's new homeware
9 things to see and do at Clerkenwell Design Week
Advertisement - Continue Reading Below
14 of the best outdoor armchairs for summer 2022
This new design showroom is a must-visit
Created by
Design Centre, Chelsea Harbour
19 of the best planters for outdoors and in
Martha Freud’s tableware collection for 1882 Ltd
How to build a beach house by RX Architects
Roksanda Ilinčić’s most treasured object
The best decorative plates for the table or wall
15 sustainable kitchenware buys