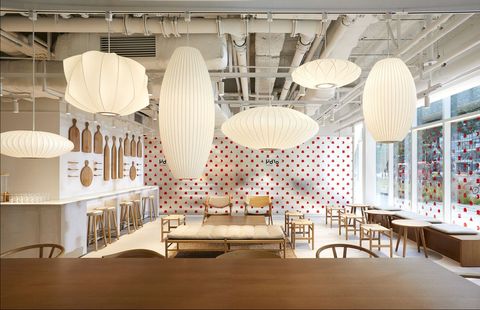 Gangnam’s style has been seriously reinvigorated by the arrival of the much-anticipated British export, The Conran Shop, which opened in this affluent area of Seoul in November. Two-and-a-half years in the making, the brand’s 12th global branch is a partnership with South Korean retail giant Lotte. Attached to one of its department stores, the shop occupies 24,000 square feet divided equally across two floors. Although similar in size to London’s Chelsea outpost, the interior feels vast due to the uninterrupted nature of the space – previously a car park.

So, why South Korea? ‘It has the energy of Japan 20 years ago,’ says the brand’s creative director Stephen Briars. ‘It’s constantly looking for the next new thing, it’s very intoxicating. The West has heard of K-pop and the cosmetic revolution, but I don’t think people realise how dynamic it is.’ The interior was conceived in collaboration with Conran & Partners as entirely open-plan. The only partitions are made of obscured glass to allow plenty of light throughout, while the perimeter walls function as blank canvases so displays can be easily adapted. For the launch, John Booth hand-painted a mural as well as limited-edition Artek stools, which sold out immediately.

‘SOUTH KOREA IS CONSTANTLY LOOKING FOR THE NEXT NEW THING. IT’S VERY INTOXICATING’

Briars describes the concept as ‘yin and yang’. This plays out as a minimal, ‘laboratory’-style ground floor, which houses a 30-metre catwalk ‘best of ’ edit alongside lifestyle products. A darker, nightclub-like first floor, meanwhile, offers books, textiles, lighting and a substantial 22-metre-long chair wall inspired by Germany’s Vitra Design Museum. Conran’s trademark ultramarine blue connects the floors in the form of an escalator encased in glass and appears in the capacious powder rooms, which feature highly Instagrammable multicoloured cubicles (above) – ‘designing particularly good-looking loos was all part of the brief ’, says Briars.

The ground floor café Orby (top) – Conran’s middle name – is attributed to Hans Wegner, featuring 20 different chairs and stools by the Danish master craftsman, produced by Carl Hansen for the project in oiled oak. These are paired with long timber tables and an assortment of George Nelson ‘Bubble’ pendants. If the café is strictly Wegner, then the VVIP room (yes, there are two levels of VIP in Seoul) is characteristically Conran, featuring – as specified by the man himself – cigars, 80 whisky brands and Bibendum-themed props (above). ‘This is a pivotal moment and an exciting development in our history,’ says Sir Terence. ‘It really gets the pulse racing to be opening in one of the world’s most vibrant, modern cities.’ conranshop.co.uk