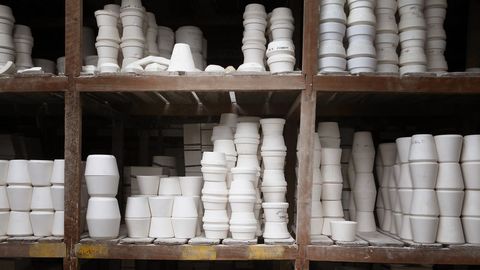 In 1946, with the nation reeling from the economic consequences of World War II, a government-backed exhibition entitled ‘Britain Can Make It’ ran at the V&A for 14 weeks. Its aim was to provide succour to the country’s manufacturing industry, while promoting the importance of contemporary design to the public. Chock-full of 3,000 consumer goods – many made from the new wonder material, plastic – it proved a hit, with people queuing around the block to get in. As a newsreel at the time opined: ‘Tired of austerity, they came to see what the future holds for them.’

Does that sound familiar? As we come to terms with (arguably) the greatest crisis for modern Britain, can we turn to the nation’s manufacturing industry once again? Can Britain still make it?

There is a well-established narrative in this country, which runs something like this: after the rise of Margaret Thatcher, neoliberal policies held the nation in its iron grip. Traditional industries – coal, steel, shipbuilding – along with whole areas of the UK, were left to dwindle, while emphasis was put on the shiny new sectors in finance and services. Much of this is true, of course, but the picture is a little more complicated. As the economist and journalist Evan Davis has pointed out, the value of our manufacturing output hit its all-time peak in 2008’s first quarter (just before everything went pear-shaped).In reality, we’ve just changed the focus of what we make, going upmarket as cheap labour elsewhere prices us out of certain areas.

Firms have to trade on design, skill and, in some instances, sheer Britishness

In the world of consumer products, this means firms have to trade on design, skill and, in some instances, sheer Britishness to create a sense of value. Savoir Beds’ history, for example, is entwined with the opening of The Savoy by Richard D’Oyly Carte in 1889. In 1997, the bed makers was purchased by Alistair Hughes, a former management consultant determined to get his ‘hands dirty’. ‘The only way to be in British manufacturing is to be at the very top,’ he confirms. ‘At the luxury end, clients like the history and provenance that goes with our brand. In China and America, people love the fact that our beds are made in the UK. It’s very important to them.’

While Savoir Beds is proud of its heritage, that doesn’t necessarily mean that its methods are rooted in the past. Some tasks, such as layering the horse hair that fills its mattresses, are performed by hand but the company is investing in new technology. Its headboards are made using CAD and a CNC machine (computer-aided design software and system), for instance. ‘Ultimately, we’re about making the best product, not the most traditional one,’ says Hughes. The company launched a collaboration with leather expert Bill Amberg earlier this year and believes that design and craft are vital to its success. ‘It gives clients confidence,’ he adds. ‘They like the idea that someone like Bill has created a range with us and we love it when we can work with a craftsperson from another area of expertise.’

‘Crockery Black’ handcarved tableware made by 1882 Ltd in collaboration with designer Max Lamb, from £40
1882 Ltd

1882 Ltd is a ceramics brand based in Stoke-on-Trent with a rather shorter history. It was launched in 2011 by Emily Johnson and her father Christopher, whose family is steeped in clay. Emily is the fifth generation of a ceramics clan that founded Johnson Brothers, before it was sold to Wedgwood in the 1960s. Christopher subsequently went on to become head of the Barlaston-based firm’s production before retiring in 2002.

‘Ultimately, we're about making the best product, not the most traditional’

A sense of provenance is vital to the company’s identity. ‘When we founded 1882 Ltd, one of its pillars was that manufacturing had to be done in Stoke-on-Trent. I passionately believe that we have some of the best industrial crafts skills in the world in terms of ceramics. Part of our role is to ensure that there is longevity – that there is a sixth generation of Johnsons in the industry,’ says Emily.

She believes that foreign markets ‘insist that work is made in Stoke because we are considered to be one of the world’s best producers of ceramics’. And, like Hughes, she thinks those skills need to be allied to design. Over the years, 1882 Ltd has worked with the likes of Max Lamb, Bethan Gray and John Pawson.‘We typically collaborate with designers who haven’t worked in ceramics before,’ she explains, ‘because they come to the material with no preconceived notions of what it can do.’

‘Ultimately we’re about making the best product, not the most traditional’

The solid timber ‘Ballot’ chair by British design duo Barber & Osgerby for Isokon Plus, £504
Isokon Plus

While some manufacturers trade heavily on their Britishness, others are rather more ambivalent. Indeed, to some, you sense the idea of the nation state is redundant in a global market. Ed Carpenter launched furniture brand Very Good & Proper in 2008 with partnerAndre Klauser and Patrick Clayton-Malone (who was then running restaurant group Canteen); Carpenter established majority ownership in 2014. It has recently joined forces with high-end maker Isokon Plus. ‘I don’t sign up for that “made in Britain” stuff,’ he tells me. ‘We’re a real melting pot. I’m British. Andre is German. Our designers come from France, Switzerland, the UK and Spain. I’d say we were a British-based brand with an international philosophy.’

Likewise, Vitsœ’s Mark Adams, whose factory in Leamington Spa opened in 2017 and makes a selection of products designed by Dieter Rams, insists: ‘We’re not a British brand. Absolutely not. We’ve got a Danish name and use a German designer. We happen to be located in Britain but we employ 15 different nationalities. There’s nothing very British about us.’

And there is no doubt that the Brexit saga has been hugely damaging to the nation’s manufacturing industries – the lack of clarity from the government making long-term planning almost impossible. However, the sector has a striking resilience, perhaps borne from being the economy’s underdog for so long. A recent report from The Manufacturer, for example, found that despite all the issues, 77 per cent of people said there was a strong drive in this country, that ‘they can be the architects of their own success without knocking on the government’s door asking for help’.

What the nation manufactures, and the way that it manufactures, has changed wildly since that V&A exhibition in 1946 – a combination of globalisation and technology has seen to that – but it remains absolutely vital to the country’s economy. Britain can still make it and actually make it rather well.

Advertisement - Continue Reading Below
More From Design
Design Decoded: ‘Cesar’ side tables
The Conran Shop opens in Seoul
Advertisement - Continue Reading Below
Why the bare necessities are the new motif
In praise of earthly splendours
The ELLE Decoration British Design Awards 2020
Meet Custhom design studio
Why linen bedding might make you sleep better
A platter of taste: the best restaurant ceramics
New home technology
History of a brand: Turri