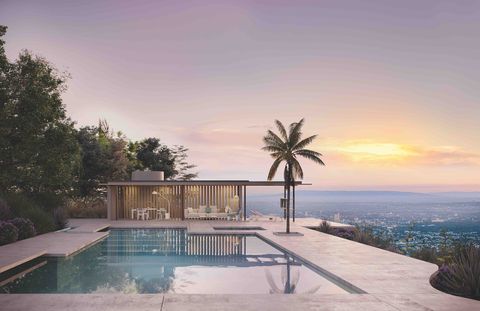 Homes designed by modernist architect Richard Neutra may not be easy to come by, particularly if you’re based somewhere other than California where the majority of his light-filled projects are located. But thanks to a collaboration between Neutra’s son, Dion, and Spanish outdoor furniture manufacturer Kettal, you can now own a slice of his iconic design wherever in the world you may be.

The ‘VDL Penthouse’ is a direct replica of the rooftop space at Neutra’s ‘VDL Research House’ in Silver Lake, Los Angeles. And, as well as this single-storey, glass-walled structure, Kettal is also offering an open-sided structure called the ‘VDL Pavilion’. Both designs measure 12 x 4 metres and can be installed on rooftops, in gardens or as an extension to an existing property.

The story behind the original house is a fascinating one. First built in 1932 using a donation from Dutch philanthropist and industrialist Cees H van der Leeuw (hence the acronym), it was designed by Richard Neutra as a space to experiment and showcase his forward-thinking ideas. Razed by a devastating fire in 1966, the house was reconstructed after some hesitation by the late architect and his son, who began working with his father when he was just 11 years old. ‘My father said, “I’m in my mid-seventies, I don’t think I have the energy to rebuild this place,”’ recalled Dion, who passed away himself in November 2019. ‘We then started brainstorming about what we could research. Having lived there for 30 years, we asked, what can we learn to do better this time?’

The answer was to preserve the building ’s original footprint but fine-tune the design, adding elements such as shallow pools to generate moving reflections, mirrors to expand the space and solar-powered louvres that track the sun as well as create a dynamic façade in response to its natural environment. Also new was the glass penthouse with its sliding doors, which was designed to connect the space with the surrounding landscape – a characteristic found throughout much of Neutra’s pioneering work.

The house as it currently stands served as the Austrian-American architect’s home and office until his death in 1970, during which time he conceived hundreds of international projects within its walls and welcomed esteemed visitors such as Julius Shulman, Frank Lloyd Wright, Alvar Aalto, Charles and Ray Eames, Jørn Utzon and László Moholy-Nagy. Donated to the California State Polytechnic University, Pomona, after his wife Dione’s death in 1990, the landmark property is now open to the public.

Kettal’s standalone reproduction of the penthouse – the manufacture of which was closely supervised by Dion – stays true to the original glass structure with its extended horizontal roof and columns set back from the façade. Instead of pine and steel, it uses aluminium and Canadian cedar wood along with up-to-date construction techniques, bringing the design into the 21st century.

The ‘VDL Penthouse’ will be available to buy, including an app-controlled, automated smart home system that operates lighting, heating and air conditioning, in November this year at an as yet undisclosed price. The open-sided ‘VDL Pavilion’, however, is available now and features vertical fins that provide shade while allowing light and air to pass through the space. This piece can also be customised with a choice of side, colour and louvre options.‘VDL Pavilion’, from approx £61,362; kettal.com.

This article appeared in the April 2020 issue of ELLE Decoration.

This content is created and maintained by a third party, and imported onto this page to help users provide their email addresses. You may be able to find more information about this and similar content at piano.io
Advertisement - Continue Reading Below
More From Design
The homeware and design shops reopening this week
Kettal’s reimagining of the open-plan workplace
Advertisement - Continue Reading Below
23 home office buys to perfect your WFH style
Toogood and Birkenstock collaborate on a new range
Wellness bathroom: how to create a home spa
Why linen bedding could make you sleep better
Sophie Ashby on her favourite possession
Design Hero: humanist architect Lina Bo Bardi
18 of the best new garden accessories
Women in design: the new names to know