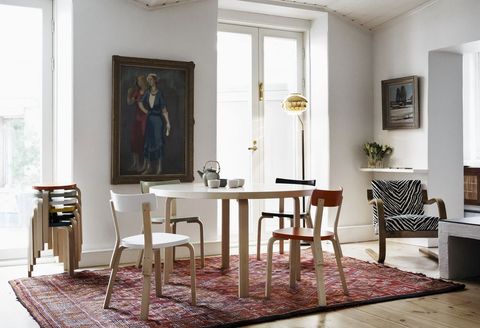 What do you get if you cross art with technology? It’s not a trick question, the answer is Artek – literally. A portmanteau of the words art and technology, it couldn’t be a better moniker for the Finnish company founded in 1935by four young visionaries: architects Alvar and Aino Aalto, art collector and artist Maire Gullichsen and critic and writer Nils-Gustav Hahl.

Influenced by the radical teachings of the Bauhaus, which declared that art, design and technology should work holistically rather than be treated as separate disciplines, the quartet had grand ambitions that stretched far beyond the purely commercial (and far beyond Finland for that matter). Their goal was to sell Alvar Aalto’s furniture and ‘promote a modern culture of living by exhibitions and other educational means’. They even drafted a manifesto detailing their mission, with headings including Modern Art, Industry, Interior Design and Propaganda.

Alvar had been experimenting with laminated wood (then a relatively new material) since the late 1920s, bending it into sinuous curves and sculptural forms. By 1932, he had created the ‘Paimio’ chair for the tuberculosis sanatorium in Paimio, Finland, swiftly followed by the now-iconic ‘Stool 60’ in 1933. His fascination for wood continued to be a central theme once Artek was established, delving further into the possibilities of pressed plywood as he sought to combine its warm, tactile qualities with a progressivist, modernist aesthetic.

Devising manufacturing methods that were suited to mass production and export was an important shaping factor for the brand’s style, leading to the development of a modular system of standardised components, including the ‘L-leg ’. Originally designed for ‘Stool 60’, it soon became an integral element of the collection and was used in more than 50 different products spanning both seating and tables.

Since 1935, over one and a half million Artek stools alone have been sold worldwide, and the popularity of the brand’s products shows no signs of abating. Here, we chart the company’s story, from revolutionary beginnings to reinventing its classics.

Alvar’s ‘L-leg’, a patented, solid bentwood component, went on to form part of over 50 different products and created a coherent collection, while also making the designs more suited to mass production and export.

The ‘Tea Trolley 900’ first launched at the 1937 World Exhibition in Paris. Alvar’s trolley was inspired by both British tea culture and Japanese wood craft and combines tiles and wicker with his signature bentwood.

‘Stool 60’ may be a humble, simple little stool, but Artek’s best-selling piece is instantly recognisable. Beloved all over the world, the design has played canvas to many special editions including recent collaborations with artists Barbara Kruger and John Booth.

The ‘Domus’ chair was designed by Ilmari Tapiovaara as part of a series of pieces for the Domus Academica student housing complex in Helsinki. It quickly became an international success due to its comfortable seat and short arms, which allowed the user to sit close to the desk while studying.

Way ahead of the game in terms of sustainability and ethical practices, Artek launched 2nd Cycle in 2006. It resells original pieces found in flea markets, secondhand stores and old schools, giving them a new lease of life and encouraging considered consumerism.

The newly launched ‘Rope’ chair designed by Ronan & Erwan Bouroullec introduces a new material to the brand, gently evolving its language while staying true to its boundary-pushing roots. 'We wanted to make a collection in harmony with the Artek tradition, but from our contemporary stance,' says Ronan Bouroullec. artek.fi

This article first appeared in the April 2020 issue of ELLE Decoration UK.

This content is created and maintained by a third party, and imported onto this page to help users provide their email addresses. You may be able to find more information about this and similar content at piano.io
Advertisement - Continue Reading Below
More From Design
Treasured: John Booth on his favourite possession
Gubi’s launches are new dinner party favourites
Advertisement - Continue Reading Below
Hit refresh on home office tech
33 of the best designer sofas to invest in now
Expert advice: how to future-proof your home
The homeware and design shops in London and beyond
Kettal’s reimagining of the open-plan workplace
23 home office buys to perfect your WFH style
Toogood and Birkenstock collaborate on a new range
Wellness bathroom: how to create a home spa