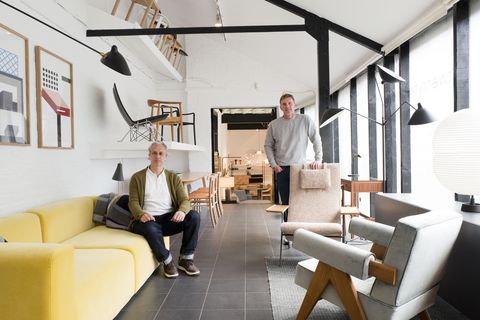 In 1996, the UK’s design landscape was almost unrecognisable compared with today. ‘There were no boutique hotels; the hospitality sector had yet to put interior design at the forefront. Office environments were very different. The internet was in its infancy and social media didn’t exist,’ explains Twentytwentyone co-founder Tony Cunningham.

‘ELLE Decoration aside, there were few publications championing contemporary design and hardly any books dedicated to it,’ he adds.

And yet it was during this apparent drought of design appreciation that he and Simon Alderson founded one of the most influential homeware and furniture stores in the capital. Having started out selling vintage clothing and objects from separate stalls in Camden Stables Market, a joint passion for art deco and modernism led to the pair taking on a shared space in a stable building.

Specialising in pre- and post-war design, they sourced pieces by eminent names such as Charles and Ray Eames, Finn Juhl and Robin Day – although even these titans were still relatively unheard of outside design circles back then. As Cunningham recalls, ‘There were few dealers in “modern antiques”.’

Rising rent in Camden proved to be one catalyst for moving to its current Upper Street premises in 1996 – the other was ‘a strong and growing sense that there was an increasing interest in design, an opportunity for us to reach more customers’, says Alderson. This hunch proved right.

It was around this time, he says, that mid-century design really started to take off: ‘When it became recognised as a credible era, allowing for a serious appraisal of post-war design, Twentytwentyone benefited tremendously.’ An early proponent of the movement, it held an exhibition of the work of Charles and Ray Eames, ‘which we believe was the first dedicated exhibition of their work in the UK’, adds Alderson.

But right from the start, the company was more than a vintage dealer. It was a hotbed of new design talent, where contemporary pieces sat alongside vintage stock, reflecting its owners’ love of 20th-century design and the fast-approaching 21st century – hence the name Twentytwentyone.

‘Even during our Camden days, we carried pieces such as Jasper Morrison’s “Bottle” storage rack and Marc Newson’s “Dish Doctor” for Magis – we also discovered the work of the British design company Inflate,’ says Cunningham. Soon after opening the store, Artek, Flos and Vitra were added to the repertoire and this eclectic fusion of new and old seemed to turn heads. ‘People bought both, it was very exciting,’ he adds.

Regardless of era, the duo’s vision to bring classic and contemporary furniture and lighting together was underpinned by an unwavering criteria of quality and longevity, which is still the case today.

‘We’ve always believed good design enriches life,’ says Cunningham. ‘We focus on well-designed pieces that endure and that are, hopefully, passed down through generations.’

Refreshingly, in this case, that doesn’t necessarily mean a hefty price tag or an intimidating atmosphere. Visit one of its showrooms (a second branch on River Street opened in 1998) and you’ll see pieces by lesser known, small scale brands or makers given as much prominence as classics from Carl Hansen & Søn or Isokon Plus. Aman Khanna’s animated ‘Claymen’ and Hafod Grange’s ‘Dandelion’ paperweight have proved to be bestselling gifts, for example.

Catering to a mix of price points and personalities is something the store has worked hard on, and is perhaps why its customers range from illustrious institutions, such as Tate Modern and Royal Festival Hall, to weekend shoppers popping in for a browse. Both are held in equal regard, something Alderson believes comes from being an independent: ‘We’ve always strived to help our customers navigate the complexities of furnishing their home – many have shopped with us since the beginning and have become friends.’

The store’s collection of anniversary exclusives are another prime example of the Twentytwentyone ethos at play, and celebrates the designers and brands with whom it has forged lasting partnerships over the years – and it’s quite the roll call.

There’s a limited run of Jasper Morrison’s ‘Thinking Man’s Chair’ for Cappellini in a new hot-dip galvanised finish; re-editions of Robin Day’s ‘Reclining Chair’ and ‘Transparent Table’, the latter never seen outside of the Days’ home before now; a Karelian birch version of Alvar Aalto’s ‘Stool 60’ and a birch version of his ‘Tea Trolley 901’, both for Artek, plus an Anni Albers wall hanging in collaboration with Christopher Farr.

With a number of prestigious projects under its belt (the Barbican and V&A museum are also clients) and partnerships with leading brands all over the globe, you’d expect some pretty starry stories from Alderson and Cunningham’s 25 years in the business. But for them, the highlight has been to share their enthusiasm for design.

‘It’s humbling to know that we’ve played a small part in people’s homes, lives and environments,’ says Alderson. ‘The knowledge that gifts we sold are passed on, or that museum interiors carry furniture we supplied is incredibly rewarding.’ twentytwentyone.com

Related Stories
The homeware and design shops in London and beyond
The best vintage furniture dealers on Instagram
What’s in store for the future of British retail?
This content is created and maintained by a third party, and imported onto this page to help users provide their email addresses. You may be able to find more information about this and similar content at piano.io
Advertisement - Continue Reading Below
More From Design
Former Gucci designer Gergei Erdei's new homeware
9 things to see and do at Clerkenwell Design Week
Advertisement - Continue Reading Below
14 of the best outdoor armchairs for summer 2022
This new design showroom is a must-visit
Created by
Design Centre, Chelsea Harbour
19 of the best planters for outdoors and in
Martha Freud’s tableware collection for 1882 Ltd
How to build a beach house by RX Architects
Roksanda Ilinčić’s most treasured object
The best decorative plates for the table or wall
15 sustainable kitchenware buys