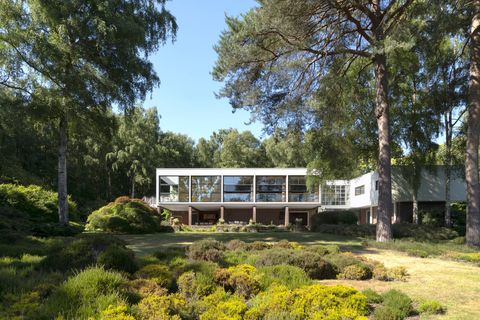 Villa Savoye may be the most famous house of the modernist era, but the UK has its own version tucked away in leafy Esher, Surrey. Built in 1938, seven years after Le Corbusier’s masterpiece, The Homewood adopts many of the principles that defined contemporary architecture of the time and fuses them with the traditions of the English country house. With its lustrous white walls, elevated living spaces and expansive glazing, it is a building that has rightly earned its own place in design history.

The Homewood was designed by British architect Patrick Gwynne, aged 24, to replace his childhood home positioned uncomfortably close to the A307. His parents, Commander Alban Gwynne and wife Ruby, had decided to knock down their old Victorian house and construct a replacement in a more secluded corner of their eight-acre estate.

Gwynne designed the two-storey building with most of its living spaces on the first floor – a move made possible by slender Le Corbusier-inspired pilotis (supporting columns). Divided into two wings and organised around a glazed atrium with a grand spiral staircase, one side is a sequence of bedrooms and bathrooms, and the other a spacious, open-plan living and dining room with kitchen and utility areas slotted in behind.

Each wing has its own character, but both carry all the traits of the modernist style, particularly in the free-flowing nature of the plan and the detail-free aesthetic. It is only in the particulars of the layout that the country house sensibility comes through, from the flower room located on the ground floor to the dedicated quarters for live-in staff.

Time in the house turned out to be short-lived for Gwynne’s family due to the arrival of World War II. His father rejoined the Navy while his mother rented out the home, but both died before peace was declared. His sister Babs joined the Wrens, then married soon after the war was over. But Gwynne returned, following service in the RAF, with a head full of ideas for the property.

He spent subsequent decades bringing the interior up to date and installing custom-designed furniture. He treated the garden with equal importance too, installing a lily pond, a serpentine bridge and a rhododendron tunnel. Fellow architect and friend Sir Denys Lasdun described The Homewood as ‘the great love of Patrick’s life’.

Gwynne transferred ownership of The Homewood to the National Trust ahead of his death in 2003, with the stipulation that it must remain in use as a private home. Tours, then, are limited to one a week, six months of the year, and only through advance booking. Its status as one of only two modern properties in the entire National Trust portfolio (the other being Ernő Goldfinger’s 2 Willow Road) speaks volumes: this is British modernism at its very best. nationaltrustcollections.org.uk

Related Stories
The pride of Poole harbour
The glass house
Inside Brad Pitt’s modernist Los Angeles home
This content is created and maintained by a third party, and imported onto this page to help users provide their email addresses. You may be able to find more information about this and similar content at piano.io
Advertisement - Continue Reading Below
More From Design
Former Gucci designer Gergei Erdei's new homeware
9 things to see and do at Clerkenwell Design Week
Advertisement - Continue Reading Below
14 of the best outdoor armchairs for summer 2022
This new design showroom is a must-visit
Created by
Design Centre, Chelsea Harbour
19 of the best planters for outdoors and in
Martha Freud’s tableware collection for 1882 Ltd
How to build a beach house by RX Architects
Roksanda Ilinčić’s most treasured object
The best decorative plates for the table or wall
15 sustainable kitchenware buys