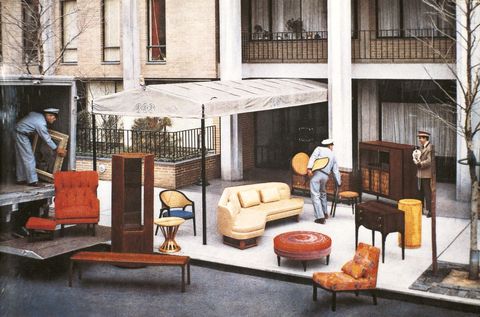 ‘Modernism means freedom – freedom to mix, to choose, to change, to embrace the new but to hold fast to what is good,’ Edward J Wormley (1907-1995) once said. It was a philosophy he lived by throughout his career, which flourished from the 1930s until the 1970s and was distinguished by his ability to adapt various design styles to suit a mainstream American audience.

Wormley borrowed freely from eras both ancient and modern – classical Greek furniture, French Empire style and 1930s modernism – yet he was anything but a copyist. Rather, his exhaustive knowledge of design history, married with his respect for innovation, resulted in a style all his own. In later life, he lapsed into obscurity, but now a reissue of his best archive pieces promises to change that. Produced by Baker Furniture, the collection features 20 designs.

Wormley was born in Oswego, a village in rural Illinois. He discovered a passion for design while at high school, studying interior decoration via a correspondence course. Later, he trained at the Art Institute of Chicago before travelling to Europe in 1931, where he met heroes of the modernist movement like Le Corbusier and Émile-Jacques Ruhlmann.

Returning to the US, he found the Depression in full swing, but serendipity united him with Indiana manufacturer Dunbar. It specialised in handmade horse-drawn carriages, but the invention of the automobile necessitated a change in direction. Wormley’s love of hand-crafting suited the company, and his position as chief designer would last four decades.

WORMLEY’S KNOWLEDGE OF DESIGN HISTORY, AND RESPECT FOR INNOVATION, RESULTED IN A STYLE ALL HIS OWN

The prolific designer produced upwards of 100 pieces for Dunbar each year. Inspired by the Arts and Crafts movement, his 1957 ‘Janus’ collection, fused antique influences with contemporary, angular shapes, and incorporated vintage elements, including old Japanese woodblocks. Wormley also reworked existing designs with American tastes in mind, but without ever sinking into the derivative.

Wormley’s status as American design hero was cemented in 1961, when Playboy magazine photographed him with Eero Saarinen, Charles Eames, George Nelson and Harry Bertoia, each man sitting on one of their own designs. His fame hasn’t quite kept pace with these cohorts, but it’s surely time for him to step back into the limelight. bakerfurniture.com