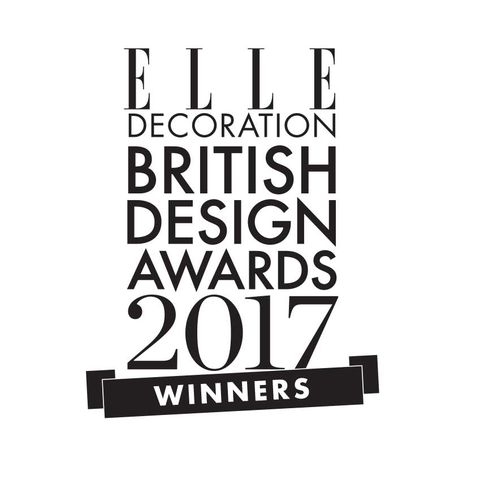 INTRODUCING THE WINNERS OF THE ELLE DECORATION BRITISH DESIGN AWARDS 2017

CRAFT Jo Elbourne Elbourne transforms secondhand furniture into pieces of practical art. Describing herself as ‘a sort of weaver’, she worked in menswear after graduating with a textiles degree in 2000, before moving back into making in 2015, salvaging furniture frames and adding new seats. ‘I like blocks and geometry, uninterrupted areas that traditional weaving didn’t lend itself to,’ she explains. Based in Margate, Elbourne works from a shared studio, an environment that fosters artistic freedom. ‘I’m inspired by painting more than furniture,’ she says. ‘I like minimal artists, such as Donald Judd and Ellsworth Kelly. But my pieces are functional rather than art objects – although quite a few people don’t want to sit on them. I work to suit the frame that I’ve got, which at the moment includes a lot of mid-century pieces,’ she says. Elbourne also hopes to work with a furniture maker to create a collection from scratch. After exhibiting in the British Craft Pavilion at London Design Fair, Elbourne’s working on an interior design project and new products. On winning, she says: ‘I’m delighted and a little stunned; it’s humbling and encouraging.’

TEXTILE DESIGN Vicky Cowin We were enchanted by the delicacy of Cowin’s handmade silk wallhangings. Weaver Vicky Cowin creates exquisite wallhangings from her home studio in southeast London. She started her business last year, hand-dyeing pure silk in her garden, before affixing it to her loom and seeing where the yarns took her. ‘I find weaving incredibly stimulating, but therapeutic at the same time,’ she says. Her designs feature light, geometric patterns interspersed with dramatic tufts, on a complicated woven base. ‘I’m inspired by signs and symbols, alchemy and traditional costume. I mix up ideas, creating a drawing effect with warps and wefts,’ she explains. ‘I’m always learning – the more complicated things are, the more interesting I find them.’ It looks as though Cowin will be at her loom for the foreseeable future. Her sights are set on creating larger pieces: she’s produced a rug sample to be woven in wool, is in talks with stockists and is thinking about developing upholstery and accessories. Describing herself as ‘totally delighted’ to win an ELLE Decoration British Design Award, she continues: ‘It’s lovely to know that people appreciate my work.’

CERAMICS Vicky Lindo Pottery duo Vicky Lindo’s take on folk ceramics is completely charming. Vicky Lindo and her partner Bill Brookes work out of a Victorian pigeon club in Bideford, Devon, producing pieces for their brand, Vicky Lindo. Lindo is focused on creating colourful sgraffito ceramics, making relief illustrations on painted plates and vessels by scratching the unfired clay. Meanwhile, Brookes is the chief mould maker and clay master, mixing Devon ball clay and Cornish china clay. The tale of the evening-course-turned-lifelong-passion applies here: in 2009, while on maternity leave from her job at the Burton Art Gallery, Lindo signed up for a 12-week pottery course
and ‘caught the bug’. From there, the pottery practice – inspired by folk art, from American quilts to the traditional North Devon slipware collection at the Burton – rolled into her home kitchen. Brookes was working as a cabinetmaker at the time, but offered to make her plaster moulds (on the living room table). Fast-forward to today, and Lindo and Brookes remain dedicated to enjoying the process of their craft, as they believe it shows when ‘things are made with thought’.

FURNITURE DESIGN Will Elworthy Elworthy wowed us with his modern take on traditional woodworking. Having ‘always been quite handy’, Will Elworthy’s decision to quit his career in TV production and turn to furniture making was a natural one. In 2012, he enrolled in the ‘Fine Woodwork’ course at the Building Crafts College in Stratford, a two-year endeavour during which he was ‘at the bench five days a week’. While there, he used to ‘knock about’ on a lathe. ‘With furniture making, everything is so precise,’ he says, so he found wood turning, which is all about feeling the shape of a design, a real relief. It’s no surprise that turned elements feature in many of his designs, from chairs to desks to wooden bowls – some of which are stocked at London store The New Craftsmen. Just two years out of the course, the commissions keep rolling in for his intricate works in ash, oak, walnut, sycamore and more. This ‘one-man band’ enjoys the challenges of working with clients, no matter what the request. In fact, he’s currently working on a desk-cum-table-tennis-table. Clearly, there’s no end to this designer’s creativity.

ACCESSORY DESIGN Louis Jobst This architect-trained maker’s lamps are sculptural works of art. After seven years spent training to be an architect, 30-year-old, Bristol-born Jobst found himself working with his hands. He became a sculpture fabricator at Mike Smith Studio, a workshop that turns artists and architects’ designs into reality. ‘As an architect, I always wanted to get my hands dirty and build things,’ says Jobst. ‘And I got to learn on the job at Mike Smith Studio.’ It was there, building a brass pavilion for architect Jamie Fobert, that he grew interested in experimenting with patinating metals. For the past 12 months, Jobst has been busy in his workshop in Acton, west London, developing the techniques needed to create the patinated steel base on the ‘Monument’ lamp and the spun brass shade atop the ‘V’ lamp (both above). Unsurprisingly, architecture inspires his designs. The lamps’ silhouettes and materials are so striking that they remain things of beauty even when the lights are switched off. ‘Winning this award is a great catalyst,’ he says. ‘I look forward to producing more pieces that bridge architecture and lighting.’

The ELLE Decoration British Design Awards have championed some of the biggest and best names in British design.

This content is created and maintained by a third party, and imported onto this page to help users provide their email addresses. You may be able to find more information about this and similar content at piano.io
Advertisement - Continue Reading Below
More From People
Morag Myerscough on her most prized possession
Design hero: reluctant postmodernist Aldo Rossi
Advertisement - Continue Reading Below
Nine female designers every aesthete should know
ELLE Decoration British Design Award winners 2021
Treasured: Emily Forgot on her favourite object
Treasured: Sebastian Cox on his favourite object
Gabriele Salvatori: 'Design is like music'
Created by
Salvatori
Name to know: British designer Fred Rigby
Treasured: Kit Kemp on her favourite possession
Treasured: John Booth on his favourite possession