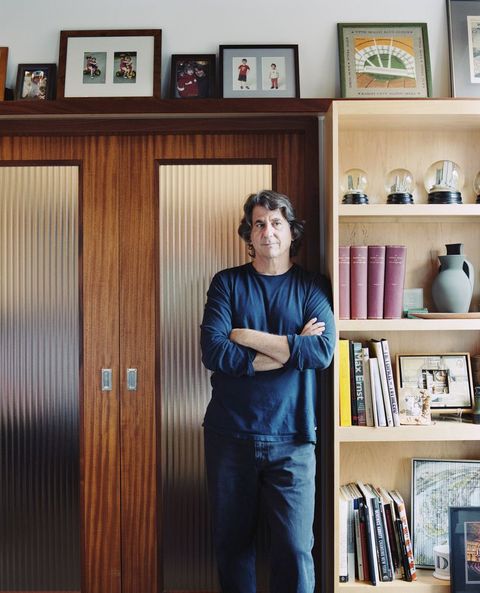 Forget the blond buffoon leading the USA, if there’s anyone who’s made America great again, it has to be Rockwell. He may not be that famous on this side of the Atlantic, but those in the know are well aware of how he’s been quietly transforming the way the world looks, lives and enjoys itself for the past 35 years. His studio, Rockwell Group, is a thriving 250-strong New York-based operation with a European satellite office in Madrid, and since launching in 1984, it’s been behind the design of everything from public spaces and museums to hotels, restaurants, furniture and products, even the sets of Broadway shows.

At our first meeting, I’m ushered into a small windowless room at the back of one of the floors of a typical New York low rise in Manhattan’s Union Square. The former office post-room has recently become the architect’s haven, the place he goes to think. Rockwell – tall and full of presence –warmly welcomes our group in. ‘Thank you for being here,’ he enthuses before sitting at the grand piano filling up the majority of the small room and playing a few bars of a classical refrain. It’s a pertinent introduction to a man whose world and work revolves around the idea of making people feel comfortable and can literally put on a show.

Sofa upholstered in ‘Ambiance’ velvet, from the ‘Dreams’ collection for Jim Thompson

‘I began the studio with three key interests,’ he explains, when we catch up later that day. ‘One was the notion of hospitality. When I moved to New York, what I fell in love with was how messy it was, how it was a city defined by its skyline. The second was theatre and performance, and the third was studying public space.’ His love of theatre is no surprise. Rockwell’s mother was a vaudeville dancer and choreographer, who would often cast him in productions.

Moving aged 12 from New Jersey to Mexico and later studying in London gave him a sense of the role of communal public areas and their effect on the community.‘Those influences formed the basis of my work,’he acknowledges. ‘We create a whole range of things, from museums to restaurants to hotels to performances. They may seem distinct, but the idea that links them is that they all strive to acknowledge the importance of the audience.’

It’s this human element that defines Rockwell Group’s many projects, giving them life, colour and energy, whether it’s hotels for brands such as Andaz or W or restaurants for Nobu, who the studio has worked with for 25 years. ‘It’s strange,’ he says, ‘many architects prefer their buildings without people in them. Not us. People are at the heart of what we do.’

This is clear, given a major pivot point in Rockwell’s work has been the recognition that design can have an immediate impact on people’s lives – something that was brought into relief by two traumatic moments... ‘In 1994 my brother died of AIDS,’ says Rockwell. ‘At the time in New York, you just saw the entire design community get decimated. I got involved with the Design Industries Foundation Fighting AIDS (DIFFA) and ended up its chairman for 12 years. It was a revelation to see how the act of making was an act of optimism and defiance.’

Then seven years later, a week after the terrorist attacks of 9/11, Rockwell was asked to help a school that was forced to evacuate and move to an abandoned building. ‘As a studio we were so deflated, because what we do is create places for people to engage in and get pleasure, and that seemed irrelevant in the face of this disaster,’ he explains. ‘We brought in 30 people from my office and different artists we knew in the city and created a sort of urban barn-raising in this school. Once again I saw the power of acting.’ This led to more charitable and philanthropic endeavours, culminating with the development of the Playground Project, a pro-bono piece of work done by the studio to create portable shapes that could transform unused areas into play spaces for children with the first site-specific space opening in Manhattan in 2010.

The connection between Rockwell’s work and fun doesn’t end there. There aren’t many renowned architects who count a Tony (the US’s most celebrated theatre award) among their accolades, but Rockwell can. Winning the 2016 Tony Award for Best Scenic Design for the musical She Loves Me is a career highlight, but he has had six other nominations, showing the studio’s proven aptitude for set design.

‘As a kid I fell in love with the potential of performance,’ he explains. ‘I worked for a summer with a theatre on lighting and design to get that experience. But it wasn’t until the mid-1990s when the studio was going well, that I thought it would be interesting to see what it would be like to work in theatre, and started meeting directors. It was a risk, but I’ve always wanted to continue to be open to new influences, willing to try new things.’

How does he feel his theatre work blurs with the rest of the studio’s output? ‘We believe in creating a world in which people can have a kind of memorable engagement,’ he points out. ‘Where they’re remembering the environment and their experience in it. So, it’s not coming out of a show remembering the sets separate from the story, leaving a restaurant thinking about the interiors in isolation away from the food.

Rockwell’s latest project, The Shed at Hudson Yards, New York’s huge and ambitious urban regeneration project on the edge of Chelsea, perfectly fuses a number of the studio’s areas of expertise – theatre and performance space, museum/ gallery areas and a restaurant and public lounge. Rockwell describes the joint project with architecture firm Diller Scofidio and Renfro as ‘a once-in-a-lifetime opportunity’.

Cedric’s at The Shed restaurant

‘Liz Diller and I had been friends for a long time and her studio and I had done work together,’ says Rockwell. ‘When we were approached about the project in 2008, we thought, well, if we do it together, that will increase the chances that we’ll get it.’

The space-age new arts centre features a steel-shelled roof in high-tech plastic. It can be extended to almost double the size of the eight-storey complex, which includes two levels of galleries and a theatre, plus rehearsal and events spaces, a 1,600 square- metre courtyard for open-air happenings and installations and a restaurant-bar and lounge, Cedric’s, conceived by Rockwell and chef Danny Meyer.

’WHEN I MOVED TO NEW YORK, WHAT I FELL IN LOVE WITH WAS HOW MESSY IT WAS’

‘No existing cultural institutions wanted to expand in 2008,’ says Rockwell. ‘The city was looking for a new kind of place, and we were lucky enough to imagine a space that would protect that area for artists.’ Five years later DSR and Rockwell Group also won the contract to create 15 Hudson Yards, the luxury high-rise connecting with The Shed and housing its mechanics.

Rockwell and the studio hail 2019 as a particularly important year. As well as The Shed and 15 Hudson Yards, he has recently completed restaurants of differing scales and sizes – the slick Nobu Downtown and the fabulously warm and intimate Wayan, for instance. Hotel projects also continue apace: Moxy Chelsea has opened in the heart of the city’s Flower District, the studio’s Madrid office has worked on a sumptuous rework of the Gran Hotel Inglés and the US team have renovated the iconic Palms Casino Resort.

Next on the horizon, Rockwell is looking to extend his extensive roster of furniture and decoration designs for the likes of Stellar Works, Roche Bobois, Knoll, The Rug Company, Bisazza and Jim Thompson. Most notable is the ‘Sage’ collection for Benchmark– a range of pieces prioritising environmental sustainability as well as the physical, emotional and social well-being of the user. ‘We were inspired by the simplicity of Benchmark’s approach and their passion for finely wrought craft and honest materials to create a visually calming and intuitive collection,’ says Rockwell. ‘With productivity, healthfulness and comfort in mind, we wanted to create a vibrant collection for what people want today.’

Again this highlights that Rockwell and his studio’s massive creative output comes down to heart: ‘How people interact together is so significant, particularly when there’s so much virtual connection now,’ he explains, ‘and that infuses everything we do.’

In a world of rush, ego and attitude, it’s hard not to be enthused by Rockwell’s warm, passionate approach. ‘The idea that each project could be our last is embedded in who we are and that gives you a real drive to create,’ he says. ‘We feel so fortunate that we get to do what we love. Someone asked me to define luxury. For me, luxury is doing the work you love.’ rockwellgroup.com