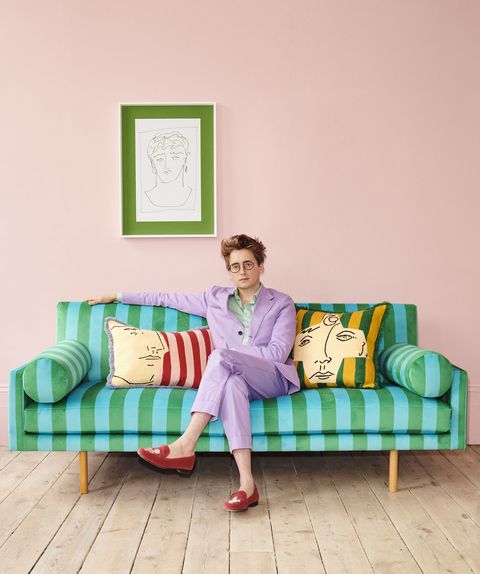 A champion of emerging British talent, Habitat has long collaborated with creative movers and shakers, from Henry Holland and Hannah Weiland of fashion label Shrimps to illustrator Quentin Jones. Its latest collaboration is with Luke Edward Hall, an artist and designer who is known for his playful, illustrative sketches and exuberant colour palettes.

A graduate from Central Saint Martins’ menswear fashion design course, Luke established his studio in 2015 and since then has worked on a broad range of art and design commissions from prestigious brands including Burberry, Christie’s and the Royal Academy of Arts.

His debut range for Habitat draws on his signature themes and favourite inspirations, including the circus, Greek and Roman mythology and 1960s colour combinations – busts of classical statues and serpents appear on lamps and fringed cushions, while an emerald green and azure blue striped velvet has given Habitat's Spencer armchair and sofa a new look. Also included in the range are two limited edition framed prints, a reversible throw and bedlinen with an embroidered emerald boarder.

Hall says of his debut range for the brand:

‘I wanted my collection with Habitat to feel playful, slightly surreal, and very romantic. I’ve been a fan of Habitat for many years and I treasure copies of the brand’s colourful catalogues from the 1960s and 1970s. It’s been a pleasure bringing my designs to life with such an iconic British company.’

Luke Edward Hall for Habitat is on sale now, from £50 for a cushion, Habitat.co.uk

This content is created and maintained by a third party, and imported onto this page to help users provide their email addresses. You may be able to find more information about this and similar content at piano.io
Advertisement - Continue Reading Below
More From British Design
Introducing L.Ercolani, Ercol’s new sister brand
Name to know: British designer Fred Rigby
Advertisement - Continue Reading Below
Henry Holland on his new ceramics collection
Why is stylish stationery such an enduring joy?
Behind the design: the ‘Balzac’ armchair by SCP
Mother of Pearl’s first sustainable homeware range
The best bespoke furniture makers in the UK
Urban Splash: property developer with a difference
The 4 British craftspeople making woodcraft cool
Jonathan Saunders debuts furniture collection