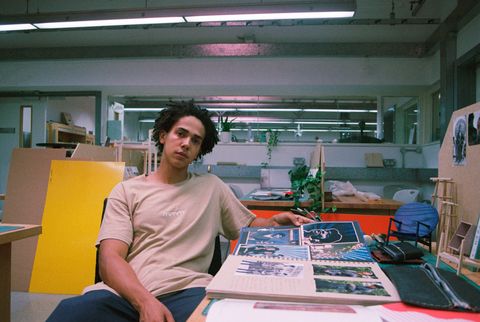 The British designer won 2018’s Cræftiga prize for his ‘Iklwa’ chair and scooped second prize at New Designers’ ‘One Year In’ showcase last year. Collins is also a committee member of inclusivity campaign group Design Can.

I had initially considered pursuing sculpture but, ultimately, I wanted to better understand and explore how people interact with the objects around them. This sits at the centre of my process; how the positions we are put in and the forms that surround us can affect our thoughts.

My breakthrough piece was the ‘Iklwa’ chair – this project was an exploration of my own identity and lineage. It was in response to discoveries about my heritage and became an investigation into how a design could evoke certain feelings.

The thing that excites me most about being a designer in today’s landscape is that being exposed to a wide community of creatives practising various disciplines means we’re pushing each other with unique ways of working and thinking on a daily basis.

I’d like to see changes in the industry, such as more opportunities and exposure for people from different backgrounds and genders. The representation of BAME and women designers is still disproportionate within major roles in the industry, and this needs to be rectified.

I’m currently working with accessory brand Campbell Cole, which is branching out into homeware. I’m also collaborating with Benchmark on a range of furniture. maccollins.com

The Spanish architect and designer is based between Madrid and Copenhagen. She founded her studio in 2016 and, after three and a half years as a designer for Ferm Living, has recently returned to working independently.

What drew me to design and still attracts me to this day is how objects and furniture can be carriers of so much meaning. To design is to communicate, so an object is a language with limitless narrative possibilities.

My creations are based on an inherent simplicity and have an architectural character. I work with what’s essential to the piece; there’s nothing unnecessary.

Getting hands-on with the materials is the part of the process that I love the most. You can learn so much from them by manipulating, experimenting and observing.

My breakthrough pieces include the ‘Grasp’ boxes, ‘Pleat’ pitchers and ‘Unfold’ bowls. They were part of a project about how to create individuality within serial production.

What’s great about being a designer right now is that globalisation has made the possibilities endless. I can collaborate with companies and creatives across the world, which is a fantastic advantage. This is helping the industry to become more eclectic and diverse.

Phat Design founders Claudia Surrage and Christian Cowper met while studying 3D Design: Furniture and Product at Northumbria University. The pair have already won a number of student and graduate awards and have exhibited pieces at London’s Mint gallery.

We want to make people aware of design; be intrigued and excited by it. We approach everything with longevity and beauty in mind.

Making maquettes is the best part of the design process. There’s something satisfying about creating scale models from ideas and starting to see an idea come to fruition. Computer renderings don’t have quite the same effect!

We have an expansive pool of inspiration. The Swiss architect Mario Botta stands out for his wonderful balance of geometry and human touch. An artist we admire is the late American sculptorAlexander Calder, not just for his mobile works, but also his wire figures and imaginative take on kitchen utensils.

If we could change one thing about the design industry, it’s London’s gravitational pull. Being based outside the capital can sometimes feel like a disadvantage. It would be great to see more investment or incentives to allow designers to flourish throughout the entire UK.

Next, we’re working on a lighting project. It’s a refreshing change of focus as the majority of our projects have been furniture-based. phatdesignstuff.com

The Dutch designer studied at the College of Wood and Furniture in Rotterdam and Design Academy Eindhoven. He recently collaborated with Moooi on his first design for the brand, the ‘Space’ table lamp.

My work can best be described as curious, focused on materials and analytical.

For me, the definition of a ‘successful’ design is when the piece triggers something and makes you want to step forward to take a closer look.

The designer that I admire the most is the late Ettore Sottsass. His work was surprising, colourful and sparked joy – qualities that I aim to incorporate into my pieces.

When I create something, it’s important for me to start the production process by experimenting with materials. I search out the unexpected features of a material, deconstruct and then build a connection with it.

If I could change anything about the industry, it’s the constant desire for the new. Once I’ve created something, the next question is when will I make new pieces.

The most exciting thing about being a creative in today’s design landscape is the community of visionary young designers with different views of the world. They inspire me to always question my own. I am incredibly proud to be a part of a group of people who can help shape the world of tomorrow. wardwijnant.nl