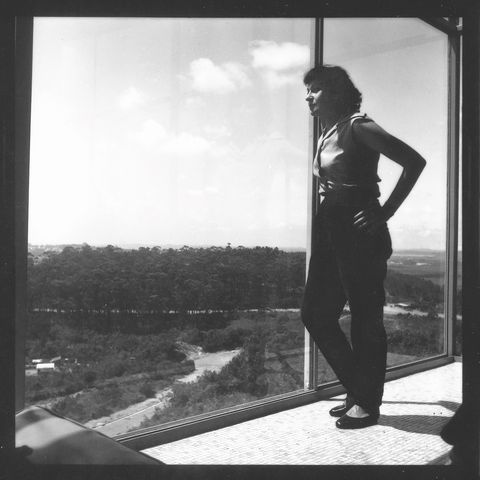 Though she was Roman by birth, Lina Bo Bardi (1914-1992) embraced the exuberant design spirit of Brazil, her adopted homeland.

Predominantly an architect but also a furniture designer, editor and set designer, Bo Bardi created buildings that are visually compelling, yet at one with their surroundings. Reusing old structures, and thus minimising architecture’s impact on the environment, was a core part of her philosophy.

Bo Bardi studied architecture at the University of Rome before moving to Milan to collaborate with Gio Ponti, becoming editor of Domus, his famous magazine, in 1944. She was active in the Italian Communist Party, where she met her husband, the art critic and curator Pietro Maria Bardi. In 1946, the couple moved to São Paulo, and Bo Bardi began to design pieces for her architectural commissions.

She preferred one-off, handcrafted items, but a number have made it into production, including the horn-shaped lever door handle available at British brand Izé, and the ‘Bowl’ chair, which has been reissued in new colours by Arper. The latter is made from an upholstered shell that sits in a ring-shaped frame, which can be adjusted by hand into an upright or reclining position.

‘She preferred one-off, handcrafted items, but a number made it into production’

Both were made in 1951 for Bo Bardi’s own home, Casa de Vidro (Glass House), on the outskirts of São Paulo, which is now open to the public. The simple, glass-walled structure sits atop slender pillars and is surrounded by trees, with some growing up through a central courtyard, so the inhabitants feel they’re part of the jungle canopy. The vast gardens – once part of an ancient rainforest – are explored via a network of stone and ceramic paths.

Bo Bardi’s other designs stand in stark contrast to Casa de Vidro. Her Museu de Arte de São Paulo, or MASP, (1968) has elements of brutalist style. A concrete and glass block supported on immense, robot-like red arms, it’s suspended above a large, sheltered public piazza, reflecting Bo Bardi’s desire to place human needs at the centre of her designs. She invented glass display easels for the interior, taking the artworks off the walls and allowing visitors to view them from the back as well as the front.

‘What we want is to maintain and amplify what we’ve found here, nothing more,’ she said of the design. It could stand as a motto for her life’s work. institutobardi.com.br