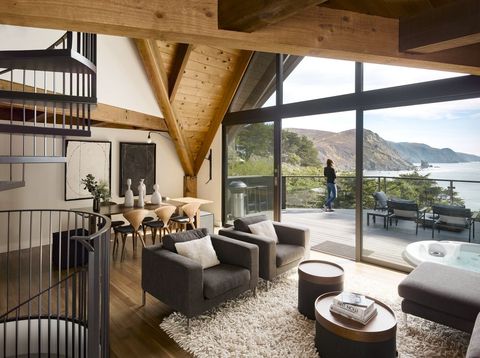 If you want a building to truly soar and sweep (like, for example, London’s new Design Museum by John Pawson, with its paraboloid roof), then rectilinear conventions are simply not going to cut it. Angles add drama and height, while curves soften the impact. Together, they introduce emotion to a home. ‘Although I am a student of the Bauhaus movement, and my projects usually resist angles and curves, working on this house freed up all of my normal constraints,’ says San Francisco-based Julie Dowling, the architect behind this beachside home. ‘I found that I could be more playful.’

The steep peaks of this artist’s cottage on Muir Beach, around an hour’s drive from San Francisco, are formed by the double A-frame structure: ‘a typical mid-century style of building designed to suit a mid-century town,’ says Julie. The three passions guiding this project were, she explains, ‘mid-century style, contemporary architecture and the ocean’.

Accordingly, she decided to preserve the home’s structure, but ‘scooped out’ the interior, removing all non-structural walls and exposing as much of the wooden ceiling as possible. ‘The only things left were angles and curves,’ she says. The one main addition was a custom-built spiral staircase that cuts ‘like a corkscrew’ through the home’s three floors, its black-metal lines working as a sleek counterbalance to the sharpness of the roof.

Dug into a hill with a wooded national park to the rear and commanding views of the ocean at the front, this house is surrounded by natural inspiration. Julie chose to open up the ocean- facing windows completely, while closing off the windows on either side of the building for privacy. She also selected walnut flooring to mimic the nearby redwood trees, and painted the walls white (‘Simply White’ by Benjamin Moore) to enhance the sense of space in the open-plan living area. dowling-studios.com