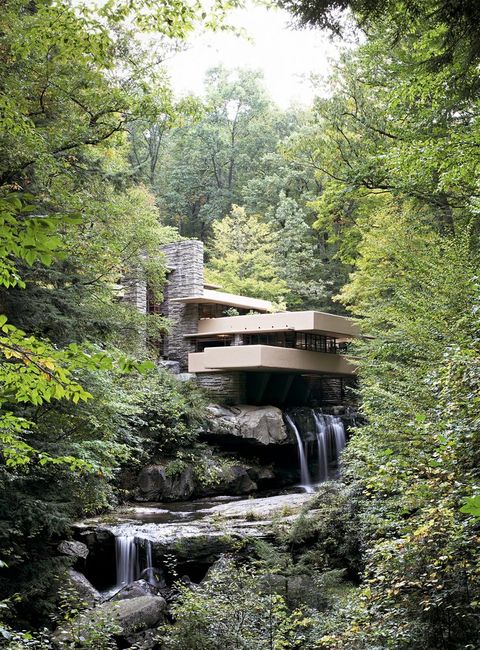 Most architects tasked with building a home beside a picturesque river and waterfall would take the opportunity to maximise views of the water; building low, to look up at the scenic cascading stream. Not American modernist architect Frank Lloyd Wright. Asked to design a country retreat in rural Pennsylvania for the Kaufmann family, Wright decided to create a house that embraced and resembled the stream and waterfalls – an architectural tribute to the falling water.

Built between 1936 and 1939, Fallingwater is symptomatic of both Wright’s love of nature and his structural daring. Free-floating reinforced concrete platforms are dramatically cantilevered over the river and the sound of the waterfall is audible throughout this space. Wright believed that ‘a building should grace its environment rather than disgrace it,’ and Fallingwater works hard to connect with nature and remain true to its locale. Constructed from sandstone quarried on site, it was built by local craftsmen.

‘A building should grace its environment rather than disgrace it’

Stone walls anchor the house to the bedrock (a part of which was left in place to protrude through the living room). Inside, flagstone floors add to the ruggedness and the hearth in the living room is made from large boulders found on the site. Vast windows and balconies leading from the main rooms bring the outdoors even closer and a staircase via the living area gives direct access to the river below.

Building a house like this was not without its difficulties and the proximity to water also caused some problems when living in it; owner Edgar Kaufmann Sr allegedly nicknamed his home ‘Rising Mildew’. Despite these challenges, Fallingwater is widely considered to be Wright’s most powerful creation, opening up a new chapter in domestic architecture and delivering a space that manages to be both modern and elemental.

Advance ticket purchase or reservations are essential if you’d like to visit Fallingwater. fallingwater.org

This content is created and maintained by a third party, and imported onto this page to help users provide their email addresses. You may be able to find more information about this and similar content at piano.io
Advertisement - Continue Reading Below
More From Houses
Tuscan holiday home that offers a taste of luxury
Inside Massimo Giorgetti’s fashionable alpine home
Advertisement - Continue Reading Below
Brutalist beachfront living on Mexico’s coastline
Modern stained glass adds colour to a ancient home
Kindness is key in this colourful London home
Minimalist home designed for calm living
Reno tips from a 142-year-old seaside mansion
This home takes indoor/outdoor living to extremes
Roman home designed to make every day a holiday
Aussie home with a unique take on modernism