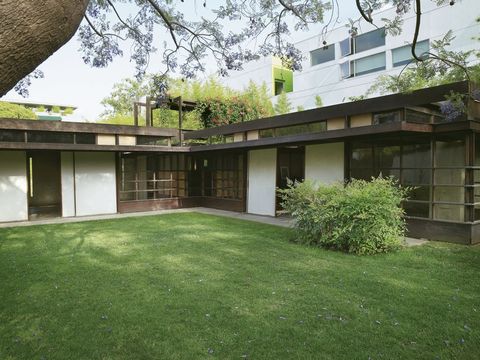 Contemporary warm-climate architecture tends to welcome the outdoors, with living spaces that transcend the boundaries between inside and out. However, in the early 20th century this was a novel concept, and California owes these roots to Austrian architect Rudolph Schindler and his innovative Schindler House.

The Californian weather was an eye-opener for Schindler, who was born in Vienna (where he studied under architect Adolph Loos) and moved to Chicago in 1914. After working with pioneering architect Frank Lloyd Wright, he moved to Los Angeles in 1922 to launch his own practice. Schindler revelled in the outdoor lifestyle that the climate permitted and, inspired by a camping holiday in Yosemite National Park, decided to create his own studio and home.

The house was radical in construction, with its flat roof and palette of concrete, wood, glass and canvas. Even more daring was its layout: designed for two families to share, much like a campsite, the Schindler House is actually two interlinked L-shaped apartments. Each living quarter contains a studio and is connected by an area that acts as a communal kitchen and laundry space. In keeping with the campsite theme, meals were eaten outdoors and the families slept in rooftop ‘sleeping baskets’ – redwood four-poster canopies, protected from the rain by canvas sides. The 232-square-metre home sits on a vast plot of almost 1,858 square metres, and living areas are delineated by hedges and different garden levels.

Schindler lived in the house until his death in 1953, with the second apartment home to creative friends and later his estranged wife, Pauline. He designed more than 400 other projects, many of which are now considered modernist landmarks, but the Schindler House stands out. As the first home to respond to the LA climate, it became the prototype for a distinctly Californian style.

For information on visiting the house, go to makcenter.org