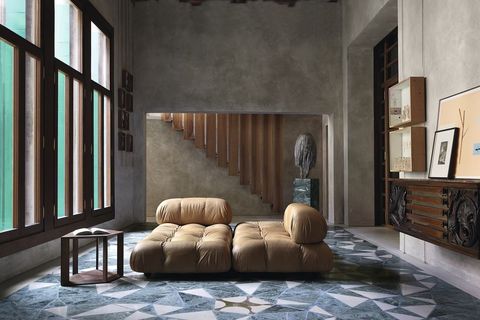 Behind a peeling porta d’acqua (a classic Venetian entrance that leads straight off the city’s romantic equivalent of a garden path: a back- street canal) lies this unexpectedly modern and minimally furnished apartment belonging to Rome-based architect Massimo Adario. The 190-square-metre, two-bedroom pied-à-terre is on the first floor, but has an extensive terrace overlooking the courtyard and views down onto the Palazzo Grimani and surrounding waterways.

This is a house of layers. Structurally speaking, the original building is medieval, but several walls needed to be rebuilt after a fire in the 1950s. As an admirer of 20th-century architect Carlo Scarpa, who was renowned for mixing time-honoured design techniques with modern manufacturing, Massimo embraces these newer additions. ‘We are a stone’s throw from the Querini Stampalia Foundation,’ Massimo says of the Venetian cultural institution, which Scarpa part renovated in a famously sensitive style. ‘The way he intervened with classical architecture by using traditional materials in a contemporary language inspired the way I revolutionised this apartment.’

Massimo’s art collection has also been key to the formation of this space’s aesthetic – he picked Venice as a location for his second home mainly because of its art scene: ‘My partner and I love the work of the local galleries and always go to the city’s Biennale.’ Engaging art acquisitions punctuate the pared-back, soberly decorated apartment, set against a palette of dark brown, bronze and grey plaster. One artwork stands out thanks to its psychedelic floral pattern: the bespoke mural in the bedroom, created by Palermo-born, Brooklyn-based Francesco Simeti.

‘Look closely,’ says Massimo. ‘At first glance, it looks like a happy, bright scene, but the people are not joking, they’re working; they’re not happily running, but rather escaping with gas masks.’ Fortunately, the sinister subtext is alleviated by the daylight, which floods into the apartment due to the couple’s deliberate decision to eschew blinds or curtains. It’s not unusual for life indoors to be interrupted by the splashes and singing of gondoliers passing beneath the windows. Far from noise pollution, it’s a residents’ perk. ‘We are out of the rush here, which suits us,’ says Massimo.