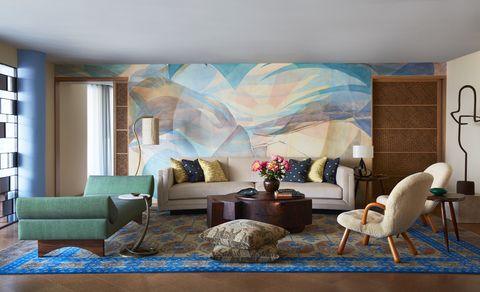 Mid-century made modern, this Santa Monica apartment, conceived by design studio Commune, is Californian cool at its high-end best. The home was created in collaboration with its owner, talent manager Evelyn O’Neill, who was introduced to Commune’s co-founder, Roman Alonso, by their mutual friend, actress Julianne Moore. ‘She’s my design guru,’ says Evelyn of Moore. ‘She has an impeccable eye.’

A key Hollywood power broker, with clients including actors Greta Gerwig, Salma Hayek, Chadwick Boseman and Daniel Kaluuya, Evelyn has owned the two-bedroom apartment since 2004. ‘The minute I walked in, I knew I wanted to live here,’ she says. ‘The view is spectacular, facing away from the city and looking out across the natural curve of the coastline. You can see all the way to Malibu.’

While the location was heavenly, the condition of the apartment wasn’t quite so perfect. Housed in an iconic mid-1960s high-rise, it suffered from serious water damage. The renovation, led by Commune, involved stripping the space back to its bare bones and re-configuring the layout. ‘For the first and only time in my life, I wiped my entire environment clean and started over,’ says Evelyn.

‘My mantra was Zen beach house. I wanted to bring the palette of the hills and the sea inside’

The overall look was inspired by the Le Corbusier-designed Maison La Roche, which Evelyn visited during a work trip to Paris in 2015. In fact, the paint used throughout her home is made by Drikolor, the company that holds the licence for Le Corbusier’s original colours. The fresh blues, coral pinks and cloudy greys that decorate her rooms are light and airy, linking the interior to the scenery outside.

‘My mantra was Zen beach house. I wanted to bring the palette of the hills and the sea inside, but with the ease and liveability that is Commune’s hallmark,’ explains Evelyn. ‘The colours really helped,’ adds Roman. ‘For example, painting the exterior door and the window frames a beautiful blue enlarged the views.’

‘The apartment has a typically Californian, laid-back feel, but there’s nothing casual about the attention that has gone into how the interiors are finished,’ Roman continues. ‘All of the details were highly considered and Evelyn really invested in the very best. Ultimately it’s texture, colour and light that make a space feel good. Add to that the personal – collections, books, loved objects and art – and you can make a house feel like a home.’ communedesign.com

This content is created and maintained by a third party, and imported onto this page to help users provide their email addresses. You may be able to find more information about this and similar content at piano.io
Advertisement - Continue Reading Below
More From Houses
Inside Ricardo Bofill’s La Fábrica home and studio
Rebellious design ideas in the British countryside
Advertisement - Continue Reading Below
New York State home designed for relaxation
Parisian home with 70s-style joie de vivre
Unique Zurich home designed for entertaining
Naturally festive mid-century home near Copenhagen
Contemporary cabin in the snowy Tyrol mountains
Inside RIBA House of the Year hopeful Redhill Barn
Brutalist home softened by texture and colour
Urban minimalism goes luxe in this Copenhagen home