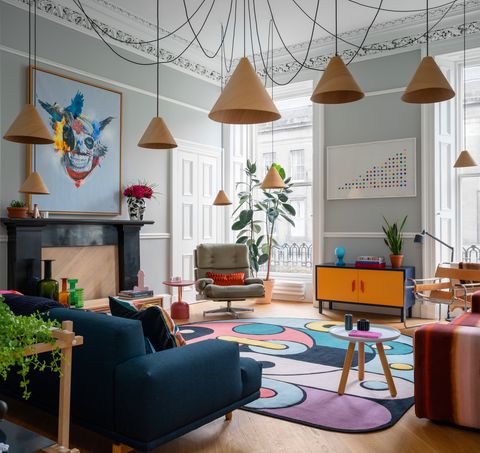 Founder of Mr Buckley Interiors & Stuff Sam Buckley believes that colour has the power to soothe, excite and make people happy. A fan of Damien Hirst’s psychedelic Spot paintings, he’s quick to point out how many of them are named after narcotics. ‘Hirst has spoken about how the body’s reaction to colours can be like taking drugs,’ he explains. ‘It can affect your mood.’ Like Hirst, the enfant terrible of the art world, Sam was born in Leeds. ‘I don’t think there’s anything about the city that’s particularly colourful, though,’ he jokes.

After initially working as an architectural technologist, in 2009 Sam moved to Milan to study for a master’s in interior design at the Scuola Politecnica di Design. It was here that he discovered a love of planning spaces, pairing his architectural background with his artistic eye. It’s also where he met fellow students Nelcya Chamszadeh and Fabrizio Cantoni, the founders of CC-Tapis, with whom he’s been creating rugs for the past ten years.

The pale silk rug that hangs in the hallway of his own home in Edinburgh’s West End is the first he created for the Italian firm. It’s a calming introduction to this four-bedroom house, built in 1880, whose grand dimensions have been transformed by brilliant blocks of bold colour. Sam’s dual passions for art and design inspired the interior here, with walls either left white to accommodate his many paintings or daubed in daring hues. The palette for the technicolour wonderland that is the living room is taken from the rug at its centre – a custom design created with CC-Tapis for one of his clients. The bedroom, meanwhile, is a study in indigo. ‘The wallpaper is from Arte. I saw it on a stand at the Milan Furniture Fair and fell instantly in love,’ he recalls. To this he added orange and green, gradually injecting extra layers of fun.

He may be a hoarder of hues, but Sam is not sentimental about stuff, abiding by his dad’s motto: ‘If you haven’t used it for six months, get rid of it.’ The belongings that have made the cut here, then, are special. From his art collection, which includes diverse works from Polish painter Robert Proch and post-graffiti artist Deams, to his vintage furniture finds – such as the green Artemide chair he snapped up on Ebay for £40 – everything has its place.

As a home, it is an immersive experience, and an undeniably positive one. ‘I think attitudes have relaxed towards this colourful approach to interior design in recent years,’ says Sam. He looks to the kaleidoscope of work being produced by designers Yinka Ilori, Adam Nathaniel Furman and Camille Walala and, in his words: ‘It all just seems so joyous.’ With plans to explore manufacturing his own products, as well as working on more residential spaces, those high spirits look set to continue. mrbuckley.co.uk