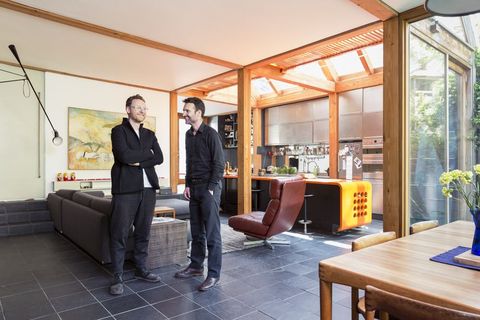 Matt Gibberd and Albert Hill, founders of The Modern Hous

This summer, I took my family on a camping holiday to Wales, where an enthusiastic woman with a rugged complexion asked me what I do for a living. ‘Erm, I own an estate agency,’ I muttered apologetically. The words lingered in the air like the emanations from a flatulent piglet. ‘Oh,’ she said, shifting uncomfortably in her Birkenstocks. ‘It’s called The Modern House,’ I continued. Her face lit up. ‘Ooh,’ she cooed, ‘I love The Modern House. My sister bought a property through you recently. And my son’s obsessed with your website. Oh, you’re so lucky. You must have seen some amazing houses over the years...’

This is the kind of conversation I have quite regularly – it’s a truly wonderful thing to see what The Modern House inspires in people. And the funny thing is that we are accidental estate agents. Back in 2005, Albert and I were both working as journalists at a number of interiors and design magazines, but we wanted to find a way of indulging our love of architecture while also making a living.

Albert had stumbled across a realtor in America who solely handled the sale of mid- century modern houses, and our instincts told us that the idea would translate well in the UK. Without a business plan, or any plan at all in fact, we cold-called the owner of a listed modernist house, Six Pillars, that was currently for sale. Having been invited in for a meeting, we promptly rustled up some headed paper and a set of business cards, emblazoned with off-beat colours inspired by Le Corbusier’s colour palette and a highfalutin strapline: ‘Specialists in the sale of 20th- and 21st-century homes of architectural distinction.’ Catchy.

The day of reckoning arrived and Albert and I dusted off our finest collarless shirts (think Richard Rogers with none of the gravitas) and hopped on the train to Sydenham Hill. The client was as open- minded as we could have possibly hoped for. Glossing over the fact that we had zero experience of selling houses (the Saturday viewings job I did as a teenager doesn’t really count), he could see that we were educated and motivated, with a decent knowledge of design and architecture. My overriding memory is of the three of us standing in the property’s double-height hallway, caressing the curves of his Marcel Breuer plywood lounge chair.

So, we had a house to sell. What next? It’s worth remembering that the phenomenon of online property hadn’t really taken off yet. Rightmove was in its infancy and had a bit of a low-rent image, and Zoopla was still three years away from launching. Our ‘office’ was Albert’s bedroom, which overlooked a cornfield in rural Hampshire, so we couldn’t exactly stick one of those glossy photo cards in the window and rely on passing trade.

Therefore we did the only thing we knew how to do, which was to adopt an editorial approach. We commissioned the accomplished interiors photographer Beth Evans to take some magazine-worthy shots of the house. We went to the library and photocopied some excerpts about Valentine Harding, the architect of Six Pillars (above, top), and Jack Leakey, the former headmaster of Dulwich College prep school, who commissioned it in the 1930s. These then formed the basis for some snazzily designed sales particulars, which emphasised the historical significance of the house and gave it a provenance.

We set up a rudimentary website, and Six Pillars became the handsome poster boy for our company’s launch. Annabel Freyberg profiled us in The Telegraph Magazine, and a piece in Wallpaper* followed. The Modern House was up and running.

The first few years weren’t easy. We set up our office in a converted fire station in Godalming, which subsidised local artists and start-ups. The rent was £55 a month (good), but the building didn’t have any heating (bad), and the phone didn’t ring much (very bad). At times we felt a bit like children playing ‘shop’.

Just as we began to build momentum, having hired our first fresh-faced assistant, the global financial crisis set in and it was like turning off a tap. I don’t think we sold anything at all for nine months. Fortunately, however, our business model saved us. We were a digital company with very low fixed costs. While high-street agencies started closing down throughout the country, we took shelter in a suitably rectilinear bunker until the storm had passed.

Looking back on it now, we were probably a bit early to set up an online estate agency. The subsequent rise of the web-based behemoths such as Purplebricks has actually helped us because, although they operate in an entirely different market, they have shifted public perception. Who shops for a new house on the high street these days? Where we nailed it, however, was that we identified a groundswell of interest in modern living, which has risen in line with our own growth.

We’ve also remained agile to aesthetic shifts, redefining ourselves into something a bit gentler, broader and more accessible. The typeface for our logo has morphed from the unapologetically modernist Futura to a reworked version of the classically elegant Gill Sans. We’ve become a media company in many ways; we produce an online magazine, we make podcasts and films, and generate content for other brands. We host events and workshops in our studio, a converted 1930s church hall in Southwark, with Crittall windows and a tangle of plants cascading from the ceiling.

These days, we sell refined rectories and Victorian villas alongside the mid-century classics that originally defined our brand, while maintaining the same quality filter that marks us out from the competition.

The thing we’re most proud of, though, is our dedicated team of staff: highly intelligent, deeply empathetic graduates who, quite frankly, could be working anywhere but have chosen to work for The Modern House – it chimes with their personal values and they are proud of it. We currently have 25 staff members, and not one has a background in the property market. Like Albert and I, they have become accidental estate agents, clad in collarless shirts, having awkward conversations with strangers about what they do for a living. themodernhouse.com

Related Story
Expert advice: how to sell your home

This content is created and maintained by a third party, and imported onto this page to help users provide their email addresses. You may be able to find more information about this and similar content at piano.io
Advertisement - Continue Reading Below
More From Houses
Tuscan holiday home that offers a taste of luxury
Inside Massimo Giorgetti’s fashionable alpine home
Advertisement - Continue Reading Below
Brutalist beachfront living on Mexico’s coastline
Modern stained glass adds colour to a ancient home
Kindness is key in this colourful London home
Minimalist home designed for calm living
Reno tips from a 142-year-old seaside mansion
This home takes indoor/outdoor living to extremes
Roman home designed to make every day a holiday
Aussie home with a unique take on modernism