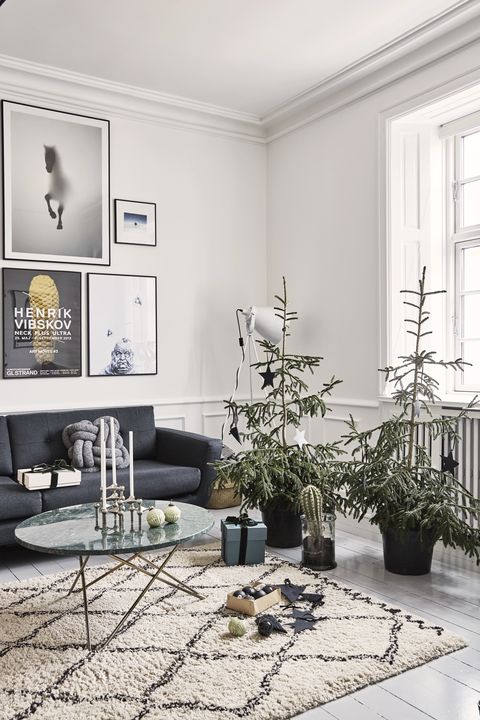 Ida Dalgaard Thestrup’s parents own a Christmas tree farm in the small Danish town of Sorø, one hour’s drive from Copenhagen. As a child, she recalls how her family would always select the most impressive and perfectly symmetrical specimen for their home each year. It’s a childhood tradition that Ida has chosen to subvert. She prefers a scattering of short, sparse, lopsided trees (also chosen from her parents’ farm), each adorned with pared-back ornaments that complement the understated aesthetic of her apartment in Dyssegård, an area just nine kilometres north of the capital city.

Ida and her husband Morten moved into the third floor of this five-storey, 1940s red-brick building in November 2013, attracted by its abundant natural light and flexible 102-square-metre floor plan. It took a year to renovate: the kitchen has new cabinetry from Ikea and the main living space is clad in wood panelling, constructed from sheets of MDF and a new wooden architrave. The walls, floors and ceilings are all painted soft white and grey – the only exception being the glorious pop of teal in the kitchen, which elevates the entire scheme.

The apartment undergoes its festive transformation on the first of December, when a thicket of wonky trees makes its way up to the apartment in the building’s old elevator. As an art director, Ida is drawn to simple shapes and a monochrome palette. Each year, she gathers together her girlfriends and they make a new set of ornaments. ‘We get a lot of inspiration from Pinterest,’ she says. This year, she plans to create a small three-dimensional townscape for her son Carl, similar to the paper Christmas trees that are clustered on the sideboard in her workspace.

Once the main tree is adorned with the couple’s collection of vintage baubles and hearts, baking is next on the agenda. Both her mother and sister take part, making a selection of traditional Danish cookies: cinnamon-dusted jødekager, wreath-shaped vaniljekranse and almond-topped finskbrød.

This year, to mark their son’s first Christmas, Ida and Morten are hosting Christmas dinner for 16 family members. Ida will decorate the table with candles and imperfect larch branches and together they will serve a traditional feast of roast duck, roast pork, boiled potatoes, brunede kartofler (potatoes glazed in caramelised sugar that Ida describes as ‘nasty good’), red cabbage and thick gravy. After the meal, they honour the Danish tradition of singing and dancing around the tree. @idestrup