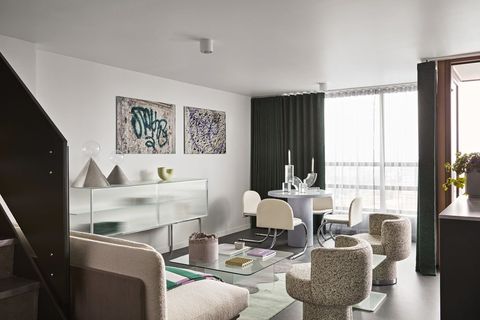 Standing tall over Poplar in the London borough of Tower Hamlets, the Balfron Tower, completed in 1967, remains one of the best-known works of the modernist architect Ernő Goldfinger. LondonCounty Council commissioned Goldfinger to build the 27-storey landmark – his first major residential scheme in the UK – following the success of his 1939 residence, 2 Willow Road in Hampstead.

The legendary Hungarian architect’s concept for the Brutalist structure was to create a concrete utopia with ‘self-contained communities in the sky’. Five years after the completion of the east London icon, his next imprint on the capital’s skyline, the Trellick Tower in the west, was realised. But while the Trellick Tower became a symbol of cool and part of the fashionable quarter of Notting Hill and Portobello Road, its Poplar counterpart never received the same levels of love and attention.

In 2014, London property developer Londonewcastle sought to change that, enlisting architects Studio Egret West and Ab Rogers Design (founded by son of architect Sir Richard Rogers) to restore the concrete masterpiece and transform its interior into high-end contemporary homes, with each practice responsible for 50 percent of the properties. Consisting of 146 apartments and maisonettes ranging from one to four bedrooms, each new dwelling has been carefully reconfigured with open-plan living areas to allow more natural light, as well as spacious balconies. Two fully finished show apartments are already complete (one designed by each architectural practice), offering a glimpse at Balfron Tower’s new guise.

There are also plans to reinstate six heritage apartments, one of each of the original flat typologies designed by Goldfinger, including the apartment that Ernő and Ursula Goldfinger lived in during 1968.Designed by Studio Egret West, they will be as faithful as possible to original layouts and designs with reclaimed heritage details and historic colour palettes, while incorporating present-day mod cons.

When complete in early 2020, key communal spaces will be reintroduced, as per Goldfinger’s vision, including a table tennis room, library, music room, and workshop, as well as spaces to house21st-century essentials such as a gym, a yoga space, and a private cinema, housed in the former tank room. The scheme will also feature a new rooftop garden providing hydroponic growing towers, to allow residents to grow their own fresh produce – a fitting addition to the tower’s reincarnation that chimes with Goldfinger’s dream of ‘communities in the sky’.

Apartments are for sale now, with prices starting at £365,000 for a one-bedroom flat. balfrontower.com

This content is created and maintained by a third party, and imported onto this page to help users provide their email addresses. You may be able to find more information about this and similar content at piano.io
Advertisement - Continue Reading Below
More From Houses
Roman home designed to make every day a holiday
Aussie home with a unique take on modernism
Advertisement - Continue Reading Below
Big architectural moves made this London Townhouse
Inside Kristina Dam’s Copenhagen home
Self expression is key in this bold apartment
New-build home designed for forest bathing
House plants are integral to this Milan home
The ideal home for the mid-century furniture fans
Inside the home of La DoubleJ founder JJ Martin
This home is an experiment in sustainable design