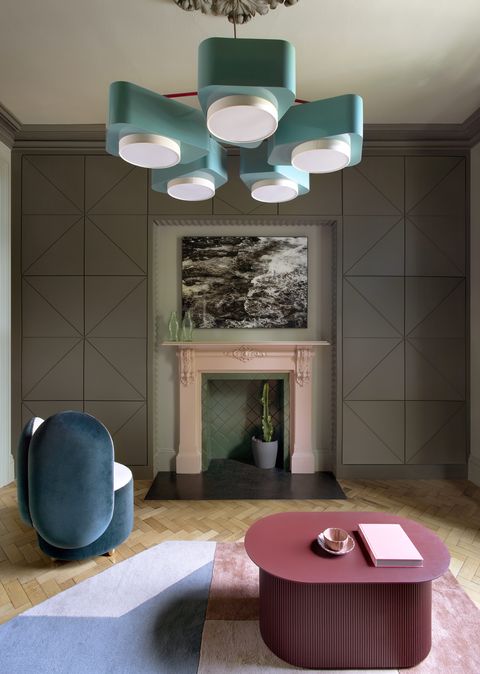 Stand on its doorstep and this home, in a well-heeled district of Dublin, looks like any other Victorian property. However, this one disguises a surprise: an angular, uncompromisingly contemporary extension. It’s an addition that could not form a starker contrast to the higgledy-piggledy charm of the home’s more traditional rooms.

John Monahan, a partner at architecture firm Noji, designed the stylish anomaly for himself, but never ended up living here. Instead, the house was sold to a young professional couple. Their challenge was to tie its contrasting spaces together without diluting any of their charm. For that, they turned to Róisín Lafferty from interior design firm KLD (Kingston Lafferty Design).

‘We wanted to create a consistent language,’ says Róisín, explaining how the geometric lines of the modern kitchen’s roof can be seen mirrored in the details of the joinery in every room. It’s what she refers to as the ‘curious playfulness’ of the colour palette, however, that really unites this home. Rooms in the original parts of the house are deliberately dark and moody, offsetting the brightness of the extension. Many of the paints were created by KLD for Irish brand Fleetwood, and all tell a story. The mustard in the hallway is an ode to one of her favourite cocktails, the Old Fashioned, while ‘Bofin Fern’, the deep green in the playroom, is named for Inishbofin Island, Róisín’s best-loved place in Ireland. ‘Colour, for me, is an emotive thing,’ she adds. ‘The tones here are cocooning. Although they are loud, there’s a calmness to them.’

Suiting the Irish-themed palette, the owners’ art collection features an array of local painters and printmakers, including Chloe Early and Jill Deering. The furniture, meanwhile, focuses on curvaceous shapes which act to soften the sharp motifs used on the cabinetry. ‘We deliberately chose organic forms that have an almost toy-like quality,’ adds Róisín. ‘It’s a light-hearted approach that reflects the owners’ personalities.’

Since work finished on the house, the couple have welcomed a baby daughter into their life. Now, the cheerful reworking of this home will come into its own and, thanks to Róisín, these new parents can enjoy a supersized bedroom with an en suite. Created by knocking two bedrooms together, this grand grown-up space is sure to be a real retreat in years to come. ‘I always talk about the importance of home on everyone’s lives. It can have such a positive impact,’ says Róisín. ‘When you work with people to create a space that makes them feel genuinely happy… that’s pretty great.’ kingstonlaffertydesign.com

This content is created and maintained by a third party, and imported onto this page to help users provide their email addresses. You may be able to find more information about this and similar content at piano.io
Advertisement - Continue Reading Below
More From Houses
Inside the first ELLE Decoration penthouse
1980s Melbourne home that's got its groove back
Advertisement - Continue Reading Below
Cool country home inspired by the landscape
Beautiful but brutalist restored Georgian home
Inside Parchment Works, a house built within ruins
Studiomama’s London home is full of bright ideas
Luxury home designed to accentuate its dimensions
Scandi/Japanese ideas create a fashionable home
Pierre Yovanovitch adds charm to this London home
Inventive uses of colour in a joyful Milanese home