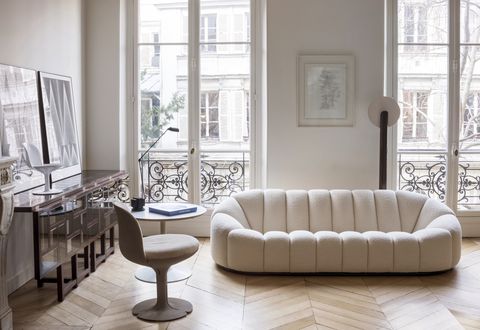 There is a wealth of family history on display in the Paris apartment of Alice Lemoine and Benjamin Paulin (pictured), son of visionary furniture designer Pierre Paulin. Situated in Barbès, a short walk from Gare du Nord, it is furnished with a mixture of Paulin classics and antiques from the castles (there are two) that belong to Alice’s side of the family.

‘I grew up with a lot of the furniture you see here,’ she explains. ‘My grandmother was someone with a lot of style and my mother actually worked with Pierre Paulin. I have chairs and lamps that are a part of the heritage of French style, but they sit next to pieces by Benjamin’s father and there is no contradiction, because Pierre learned his craft from those antiques. He always said he wasn’t a creator, he was just modernising things.’

Benjamin and Alice are currently immersed in the Paulin family business. Under the banner of Paulin Paulin Paulin (Benjamin’s mother Maia makes it a trifecta), they are taking pieces from the Pierre Paulin archive and putting them into small-scale production. While other companies produce many of the late Paulin senior’s designs, the family are creating them on a painstaking artisanal basis, frequently in limited editions.

The family home, which is shared with Irene, five, and Diane, two, also acts as a laboratory and showroom. ‘We think that people want to see the pieces in a real context,’ says Benjamin, ‘so we invite architects, decorators and collectors to view the work here.’

This is an apartment where designs are tested out and lived with. In the centre of the lounge sits the origami-like form of the ‘Tapis-siège’ daybed, with its corners that can be propped up to recline against. ‘Our absolute favourite thing to do in the living room is to all climb onto that piece and read,’ says Benjamin. In the kitchen, where he likes to cook lasagne or brandade (an emulsion of salt cod and olive oil) with sweet potatoes, there’s a sculptural combined table and seating unit that demonstrates the most futuristic end of the Paulin design spectrum.

‘We made a prototype of it that we showed at the Design Miami fair and it was bought by someone who lives just a few streets away from us,’ says Benjamin. ‘It was our dream dining table so we made one for us, too. Only two exist, and they are both here in the same neighbourhood in Paris. It’s not for everyone, but we may produce more of them in the future.’

Living with such design gems, in an environment that serves as a showcase for them, must surely present problems with two small children running around? ‘This is a space to live in more than anything,’ counters Alice. ‘We’re not going to shout at our children because they want to express themselves. And anyway, you know how it is – the first mark on something is terrible, after that it really doesn’t matter.’ paulinpaulinpaulin.com

This content is created and maintained by a third party, and imported onto this page to help users provide their email addresses. You may be able to find more information about this and similar content at piano.io
Advertisement - Continue Reading Below
More From Houses
Brutalist home softened by texture and colour
Urban minimalism goes luxe in this Copenhagen home
Advertisement - Continue Reading Below
Meditative London apartment with curves for days
Former MOT garage becomes an architect-built home
London home inspired by a portrait of David Bowie
Eco-efficient home hidden behind a garden wall
Ornate Parisian apartment with a futuristic twist
Milan apartment inspired by the city’s streets
Colour and pattern are woven into this LA home
London penthouse that’s a wabi sabi sanctuary