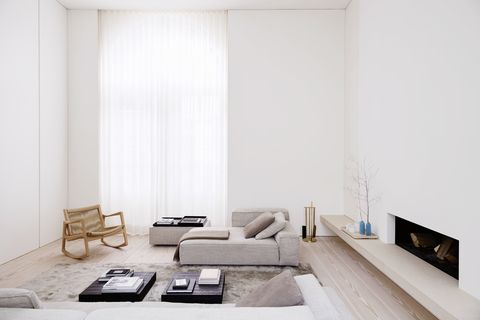 Built in 1600 as a simple weavers’ house, this generously proportioned property was first reimagined in the early 19th century, when it was turned into a coach house and stables. It’s not an unusual history for a home in Amsterdam’s Weteringbuurt, a once industrial district of the capital that is now a trendy canal-side destination.

‘We fell for its stateliness,’ says its new owner Cassander Verwey, an investment banker who had spent 15 years looking for just the right place to settle. He and his partner Hanneke Rothbarth, who works for a UK law firm, were instantly inspired by the historic building’s dimensions. ‘I had never seen so much space in the city,’ he adds. ‘It was one of a kind.’

From the outside, the house still shows the tell-tale decorative details of the Dutch Golden Age, with its arched block-brick door frame, but inside strict minimalism reigns. To achieve his vision of a ‘serene and modest atmosphere’, Cassander turned to architect Jen Alkema, whose own nearby canal house is a picture of simple, refined elegance. Together, their aim was to bring a visual tranquillity to this home. ‘For both of us,’ explains Cassander, ‘this was not about minimalism in the traditional sense but, rather, purity and the search for it.’

‘This was not about minimalism in the traditional sense but, rather, purity and the search for it’

The first step in that process was to rework the house’s floorplan. Jen added a new staircase that ascends towards a skylight, more cleanly connecting the ground floor to two existing mezzanines. One holds a main bedroom, bathroom and child’s room, the other sits in the rafters, containing two further kids’ rooms and a bathroom. The changes emphasised the home’s spacious qualities, but it’s the restrained decorative decisions that complete its look.

Wide Douglas fir floorboards from Dinesen visually connect every room, all of which have plain, white stucco walls. The furniture selection favours classic lines and low profiles, from the ‘Neo Wall’ sofa by Piero Lissoni for Living Divani in the living room to the wooden dining table, designed by Jen. Nothing fights for attention but, instead, everything encourages contemplation of the architecture, which, with its many arches and passageways, brings to mind the peacefulness of a monastery.

Jen sees his version of minimalism as a way of living, more than a design motif. It’s a lifestyle that Cassander and his family have fully embraced. ‘What you see here is visually enough for me,’ he says. ‘The quality of the space, the volume and the mass; I actually don’t need anything more. Even if there were no furniture at all, I would feel very happy here.’ jenalkema.com

This content is created and maintained by a third party, and imported onto this page to help users provide their email addresses. You may be able to find more information about this and similar content at piano.io
Advertisement - Continue Reading Below
More From Houses
Melbourne home with a dark take on beach style
New York apartment that brings the bar scene home
Advertisement - Continue Reading Below
Inside the home of Dimorestudio’s Emiliano Salci
Bohemianism meets minimalism in a Cotswolds home
Happiness boosting colourful home in Copenhagen
Amsterdam apartment inspired by ‘the golden hour’
Copenhagen home that captures the beauty of nature
Vibrant home full of bright ideas for small spaces
London house crowned by a showstopping skylight
Cape Town apartment the colour of the sunrise