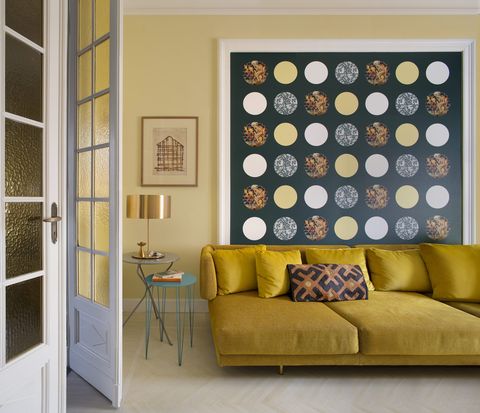 Since moving into her two-floor apartment in this early 20th-century building in central Turin five years ago, artist and designer Marisa Coppiano has filled it with colour and pattern. ‘In my childhood home, I lived in rooms covered with wallpaper,’ she says, explaining the decorative daring that has become a defining characteristic of her work and home. ‘Even in the kitchen, there were strawberry patterns on the wall!’

These days, Marisa’s own artistic interests lean more towards the scientific than the kitsch. She and the all-female team that make up her studio, situated on the first floor of her home, focus on set design for exhibitions, such as ‘Homo Sapiens’ for the Mudec museum in Milan and ‘Darwin 1809-2009’, which toured venues in Milan, Rome and Bari. ‘For the latter,’ says Marisa, ‘we used a number of maps drawn up by the De Agostini Geographical Institute, which nourished my imagination.’ They were the starting point for the wallpaper, from her own ‘Globe’ collection, which now decorates the studio’s meeting room.

Not afraid of clashing vibrant hues, she has paired the primary blue of that design with another of her original wallpapers, this time in bright pink. For Marisa, colour is emotive. The green of the entrance hall is intended to have a reassuring effect, while the inky blue of her bedroom is conducive to meditation. The most striking of her choices, perhaps, is the aubergine-like purple of the dining room. ‘It was a gamble that paid off, and has turned this into my favourite room,’ she says.

Much like the museums that house her installations, Marisa’s apartment is a theatrical fusion of objects that fascinate her. It’s no surprise that her chosen artistic medium is collage. ‘Over time, I have developed a passion for wunderkammers [cabinets of curiosity], which bring together objects that allude to a thought or stimulate points of view that are a bit special,’ she explains.

Here, the items in question are not ancient artefacts, but notable pieces of contemporary design – ‘Maui’ chairs by Vico Magistretti for Kartell, a sculptural ‘Corallo’ coat hanger by Michael Sodeau for Gervasoni and the ‘Superleggera’ chairs by Gio Ponti for Cassina to name but a few. The compositions she creates are, she says, ‘not stable and permanent, but changeable over time’. They are the story of this home, her creative world, the next chapter of which is yet to be written. marisacoppiano.com

This content is created and maintained by a third party, and imported onto this page to help users provide their email addresses. You may be able to find more information about this and similar content at piano.io
Advertisement - Continue Reading Below
More From Houses
Inside Byredo founder Ben Gorham’s coastal retreat
Daringly architectural seafront home in Cape Town
Advertisement - Continue Reading Below
Sicilian palazzo renovated with some Scandi magic
London home that shows the elegant side of salvage
Inside Cristina Celestino‘s new Milan studio
New York home with a Wes Anderson colour palette
Sunny Ibizan villa by Studio Urquiola
Art is key in this gallery-style Parisian home
Danish eco home designed as a digital detox
Canadian cabin that’s an architectural love story