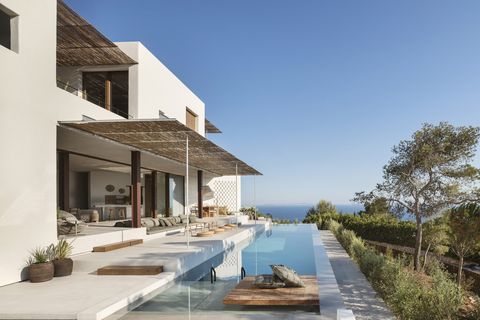 Nowhere speaks of summer like Ibiza. Even if you’ve never set foot on the island, its name at once evokes music, hedonism and a globetrotting tribe of beautiful people dancing on pristine beaches. So how does a designer reframe that bohemian legacy in a way that feels authentic, fresh and fit for modern living?

That was the challenge for Studio Urquiola, which was commissioned to build a family villa in Roca Llisa – a tranquil spot on Ibiza’s eastern coast.

Embedded like a concrete seam in the hillside, the 1,500-square-metre residence is actually two buildings linked by outdoor spaces that trace the contours of the landscape. ‘The slope was a challenge,’ says founder Patricia Urquiola. ‘We aimed to design a house that could be gently integrated into the surroundings.’

The result is a modern take on traditional Ibizan country houses, the whiteness of whose lime-covered façades give the island its nickname, La Isla Blanca.

A series of interlocking cubes, punctuated with brise soleil – small, geometric windows that filter sunlight – the villa feels contemporary yet timeless. ‘The architecture has no straight corners on the outside,’ says Patricia, ‘it’s totally white and the materials used are simple, speaking the language of minimalism.’

Communal areas sit on one level across the two volumes, while bedrooms are on different floors to maintain a sense of privacy. Roof terraces dotted with loungers and low tables are positioned to make the most of the unique light and 360-degree views of land and sea. Every detail of the construction is consciously vernacular. ‘There are no hyper-elaborate materials,’ says Patricia. ‘Walls are in washed concrete or aged pine wood, floors in micro cement or terrazzo.’

‘When I think of Ibiza, I think of family houses on a human scale, nothing monumental,’ continues the designer, whose childhood summers spent on the island have given her an innate understanding of its aesthetic.

‘Ibiza’s architecture has always had serenity and dignity, an unstructured order. The terraces, the small windows and the accessible roofs as chillout areas made up my idea of the Mediterranean.’

Her interior for this villa offers an elevated take on the island’s famously laid-back style. Woven textiles, rugs and wallhangings in cotton, wool and rattan come in a naturalistic palette of light grey and white tones, a stripe of Padrón pepper green or gazpacho red adding zing to the scheme. Patricia worked with local artisans to craft custom furniture in wood, stone, straw and cane. They sit in happy dialogue with more recognisable pieces she designed for Kettal, Gan and Moroso.

Striking a harmonious balance between the luxurious ease of a modern villa and a typical rural finca, this family home inspires a relaxed way of life. ‘Honesty defines the architecture, while simplicity and sobriety are to be found in the materials,’ adds Patricia. She has filled the rooms with work by artists like Mario Arlati, an island resident, but ultimately, she explains, the villa is a frame for Ibiza itself: ‘the surrounding nature is the true masterpiece.’ patriciaurquiola.com/studio


This content is created and maintained by a third party, and imported onto this page to help users provide their email addresses. You may be able to find more information about this and similar content at piano.io
Advertisement - Continue Reading Below
More From Houses
How Universal Design Studio shaped the way we live
Historic Bologna home with a little animal magic
Advertisement - Continue Reading Below
Inside Ricardo Bofill’s La Fábrica home and studio
Rebellious design ideas in the British countryside
New York State home designed for relaxation
Parisian home with 70s-style joie de vivre
Unique Zurich home designed for entertaining
Naturally festive mid-century home near Copenhagen
Contemporary cabin in the snowy Tyrol mountains
Inside RIBA House of the Year hopeful Redhill Barn