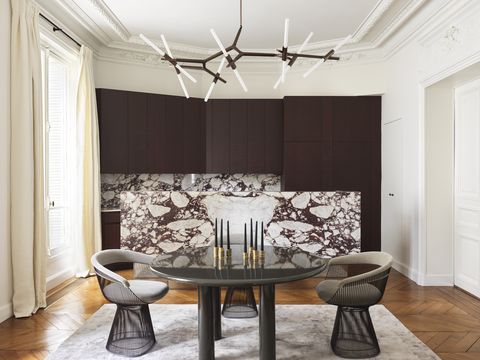 Louis-Henri Delpy and Laure Girodroux are a husband and wife design duo with quite different aesthetics. Louis-Henri was brought up in an extremely traditional environment in Normandy, not far from his architectural touchstone, the fairy tale-like Château d’Ô, which was built between the 15th and 16th centuries.

One of Laure’s greatest influences, however, is the almost futuristic French designer Ora-ïto, with whom she trained for three years. ‘He taught me to be much more adventurous and daring,’ she says.

In many ways, this 220-square-metre, two-bedroom apartment at the heart of Paris’s Saint-Germain-des-Prés district, redesigned for a high-flying 60-something couple, is a perfect synthesis of their disparate viewpoints.

The architectural framework is quintessentially French, with chevron-patterned parquet flooring, marble fireplaces topped by gilded mirrors, and flashes of intricate floral mouldings. But the furnishings have a lot more contemporary chutzpah. A kinetic light sculpture by the Swiss-born artist Bardula hangs on one of the living room walls, while a pair of sculptural armchairs by up-and-coming Ukrainian design studio Noom feature in the main bedroom.

The clients had lived here for several years before Louis-Henri and Laure’s expertise was called upon. The décor dated back to the 1990s, with a dark colour palette and cumbersome furniture.

There were also many more elaborate wall and ceiling decorations. ‘You almost felt like the living room ceiling was going to fall down on you,’ recalls Laure.

While the rear section of this home was completely reconfigured, with a spacious main bedroom plus ensuite and a separate guest room installed, the volumes of the main living spaces remained untouched. Few of the wall and ceiling decorations survived the transformation, though – the duo estimate they got rid of about 70 per cent. ‘Our aim was to preserve the character, but lighten everything up,’ explains Louis-Henri.

For the rest of the interior, their initial proposals were relatively tame. However, they quickly realised their clients were willing to go the extra mile. ‘Whenever we proposed something, they’d always go for the most daring option,’ recalls Laure.

Take the kitchen, for instance, which is dominated by a striking Calacatta Viola marble island sitting on a mirrored base. ‘From certain angles,’ notes Laure, ‘it looks as if it’s almost floating.’

The walls of the hallway, meanwhile, were custom-painted with a design that imitates the strata of rock, with a lustrous gold horizontal stripe through the centre. It is one of many gilded accents that run throughout the flat, offset by cooler ice-blue tones in the main bedroom, bathroom and study.

The majority of the furniture was chosen in response to the clients’ request for unique and unusual pieces. One of Laure and Louis-Henri’s favourites is the futuristic shiny aluminium chair created by French designer Léa Mestres in one of the home’s two office spaces. For Louis-Henri, it’s reminiscent of the work of Jeff Koons; for Laure, it adds freshness and originality. ‘It’s almost as if a UFO has landed,’ she marvels. en.girodroux-delpy.com

Related Stories
Reimagined home near the Palace of Versailles
Paris home with an chocolate-box palette
Art is key in this gallery-style Parisian home
This content is created and maintained by a third party, and imported onto this page to help users provide their email addresses. You may be able to find more information about this and similar content at piano.io
Advertisement - Continue Reading Below
More From Houses
Inside Ricardo Bofill’s La Fábrica home and studio
Rebellious design ideas in the British countryside
Advertisement - Continue Reading Below
New York State home designed for relaxation
Parisian home with 70s-style joie de vivre
Unique Zurich home designed for entertaining
Naturally festive mid-century home near Copenhagen
Contemporary cabin in the snowy Tyrol mountains
Inside RIBA House of the Year hopeful Redhill Barn
Brutalist home softened by texture and colour
Urban minimalism goes luxe in this Copenhagen home