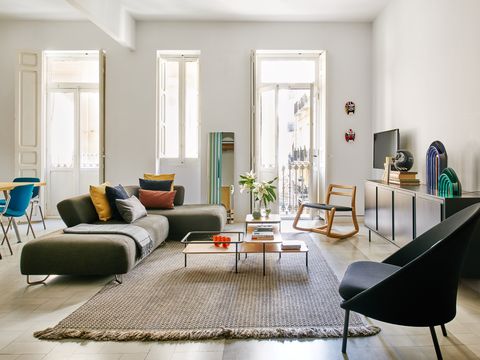 It’s hard to imagine a firm more proudly rooted in its setting than Valencia’s MUT Design. Founded in 2010 by Alberto Sánchez and Eduardo Villalón, the name ‘MUT’ means ‘silence’ in Valencian vernacular. The city informs everything Alberto and Eduardo create, both at work and at home.

Through their work with brands like Expormim and Sancal, MUT’s team has gained a reputation for skilfully reimagining vintage shapes, local crafts and natural materials in radical ways. By grounding objects in their home region, each is infused with a sense of place that creates a dialogue with the bold geometric forms that the brand favours. ‘Our design has been deemed “emotional”,’ says Alberto. ‘We always try to convey an emotion with an object or space. We want to involve the viewer, tell a story, build an experience.’

In 2020, MUT was invited by the IMM Cologne Fair to design Das Haus, a first for a Spanish studio. They named their entry a la fresca – in the fresh air –a reference to the Spanish habit of meeting outdoors after the heat of the day has passed. ‘It was something we had never done before and it was huge,’ Alberto recalls. ‘We are very proud of it.’ The plan centred on an internal courtyard that brought light, ventilation and seclusion from the outside world.

This blurring of boundaries between indoors and outdoors is a MUT motif that applies to the home of Alberto and Eduardo. After scouring his neighbourhood for two years – ‘I can be very thorough’ – Alberto found what he was looking for in 2015. The airy 130 square metre apartment sits in a 200-year-old building in the historic Barrio del Carmen neighbourhood of Valencia, close to the MUT studio and the famous Central Market of Valencia.

‘I wanted an apartment with high ceilings and a hydraulic tile floor. Most of the flats in the old city had these original elements, but many have lost them to refurbishing, so it wasn’t easy.’

With four-metre-high ceilings and elegant shutter-framed windows, the flat had plenty of potential, but the layout was less than ideal. ‘When I saw it for the first time, I was horrified; the rooms were so dark.’ A central light well was the key to unlocking a radical, yet sensitive, reconfiguration of the space. ‘It would become the unifying thread of the refurbishment. I got rid of obstacles to let light spill into the space.’

Small, dark rooms became one open, flowing plan. All other rooms, even the bathroom, can be seen wherever you stand in the apartment. It’s a bold move, challenging conventional notions of privacy. ‘The lack of intimacy could be uncomfortable, but for me, it’s just fine,’ he says.

Hidden treasures were revealed during the work, like huge wooden beams, a Catalan vault and caravista brick. Alberto explains, ‘From the beginning, I planned to combine the new and old, as that’s what I do in my job and that’s what I wanted for my home.’ He tried to preserve as many elements as he could, but the original hydraulic floor tiles couldn’t be saved, so were replaced with modern ones in the same style.

Keeping original details integral to the new scheme gives the apartment a relaxed, natural feel, comfortable in its surroundings. ‘It would be impossible to locate it in any other part of the world. The way I have redistributed it is very Mediterranean. In the Roman house, life would happen around a courtyard. The light well, in a smaller scale, is the heir to this understanding of architecture and way of living.’

Rooms are filled with vintage furniture picked up in antique markets and pieces by Alberto’s favourite designers, such as a set of Castelli chairs he found in Oporto. ‘When you travel, you bring back memories in the form of décor objects or furniture or merely ideas you later materialise in your layout,’ he says.

His home serves as a lab to test out ideas, so MUT designs and prototypes can be found in every room, from their Duplex tables for Sancal and Nautica swing chair for Expormim to a collaboration with the rug company GAN. Others were designed by Alberto specifically for the space.

The warm tones of brick and timber prevent a feeling of sterility, while the interplay between colourful objects from all over the world and the typically Valencian setting makes for a stimulating aesthetic. ‘It is a combination of what I am and what I like. I can positively say my spirit is very present.’

Valencia is the World Design Capital for 2022 and, in recognition of the contribution MUT has made to championing local design, the studio has been chosen to create the travelling exhibition representing the city.

The pride and affection Alberto and Eduardo feel for their city is apparent in their five modular pavilions, which are crafted in leftover local wood and reference the thatched roofs of barracas – shacks – and the Albufera National Park. ‘Our roots, history, tradition and territory are fundamental to understanding who we are and our work. We take nourishment and draw inspiration from them.’

Recently, many of us have had to adapt to working from home and spending more time than ever with partners and family. For Alberto and Eduardo, this has always been the case; just as MUT blurs boundaries between indoors and outside, they make no distinction between work and home. By being unafraid to inject emotion into their work and acknowledging where they come from and their differences, they have found a winning formula for work and for life.

‘We both have very defined ideas of what we want and maybe the way we get to the finish line differs, but we are always together when we cross it. I think this is why we make such a great team. We have always understood each other, and I believe this is one of the main reasons behind the success of our studio.’ mutdesign.com

Related Stories
Contemporary eco villa near Valencia
Inside Lee Broom’s new NYC penthouse
Furniture designer Mark Grattan’s Mexico City home
This content is created and maintained by a third party, and imported onto this page to help users provide their email addresses. You may be able to find more information about this and similar content at piano.io
Advertisement - Continue Reading Below
More From Houses
Roman home designed to make every day a holiday
Aussie home with a unique take on modernism
Advertisement - Continue Reading Below
Big architectural moves made this London Townhouse
Inside Kristina Dam’s Copenhagen home
Self expression is key in this bold apartment
New-build home designed for forest bathing
House plants are integral to this Milan home
The ideal home for the mid-century furniture fans
Inside the home of La DoubleJ founder JJ Martin
This home is an experiment in sustainable design