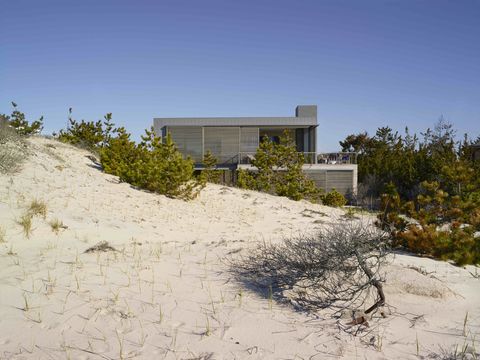 ‘We were looking out at this beautiful view of the Atlantic Ocean, thinking about the way the waves move back and forth, the way the dunes shift,’ says Glenn Pushelberg. He is describing the origins of the modular ‘Surf’ sofa, created with his partner (in life and work) George Yabu for Molteni & C, that sits in the living room of their Long Island home.

‘The design is responsive to what’s out there,’ he adds, gesturing to the sea that laps the shore of Napeague Beach, just a short stroll from the property. ‘That relationship between the inside and outside is very important to us.’

Indeed, in the couple’s summerhouse the boundaries between the interior and the landscape are regularly and playfully blurred. After deciding to replace the original home that stood on this stretch of pristine sand in Amagansett, one of the more relaxed neighbourhoods in the Hamptons, Canadian-born designers Glenn and George were free to experiment with the help of Stelle Lomont Rouhani Architects.

Their vision was for a two-storey home that speaks to the simplicity and serenity that is apparent in their work. Initially focused on interior design, having lent their talents to hotels (The Londoner in London’s Leicester Square being the most recent example) and retail spaces, Yabu Pushelberg has expanded to create everything from bathtubs for marble experts Salvatori to the aforementioned sofa for Molteni & C.

‘Pure modernism was happening at the time we were growing up in Toronto,’ says George, who recognises a certain humbleness in Canadian design that has influenced him and Glenn. ‘One of the last buildings that Ludwig Mies van der Rohe designed happened to be in Toronto – the Toronto-Dominion Centre,’ he continues.

The great modernist’s all-consuming approach, where everything is equally considered, down to the furniture, is something that is also apparent in Yabu Pushelberg projects. ‘Making things that are complete and whole is part of the symphony of architecture and design,’ adds Glenn.

Here, that composition is led by the landscape. The building is cantilevered over the dunes to protect the native wildlife, while simple wood cladding and louvres allow it to blend naturally into its surroundings. Vast sliding doors open up to capture ocean breezes.

Approach the property and you are greeted by two paths. One leads to the main house, which has an open-plan kitchen and living area situated on the second floor to maximise the panoramic views from its wraparound terrace. The other passes an outdoor dining area on its route to guest rooms on the ground level.

Whether they are enjoying conversation with family and friends outside while watching the sun set on the horizon, or cosying up by the fire with a nightcap listening to the sound of the waves, Glenn and George’s home is one designed to inspire. A place to gather thoughts and explore ideas. yabupushelberg.com; molteni.it

Related Stories
7 new design hotels by the beach to book for 2021
Inspiring ideas for decorating with stone
Inside The Londoner, the capital’s hot new hotel


This content is created and maintained by a third party, and imported onto this page to help users provide their email addresses. You may be able to find more information about this and similar content at piano.io
Advertisement - Continue Reading Below
More From Houses
Roman home designed to make every day a holiday
Aussie home with a unique take on modernism
Advertisement - Continue Reading Below
Big architectural moves made this London Townhouse
Inside Kristina Dam’s Copenhagen home
Self expression is key in this bold apartment
New-build home designed for forest bathing
House plants are integral to this Milan home
The ideal home for the mid-century furniture fans
Inside the home of La DoubleJ founder JJ Martin
This home is an experiment in sustainable design