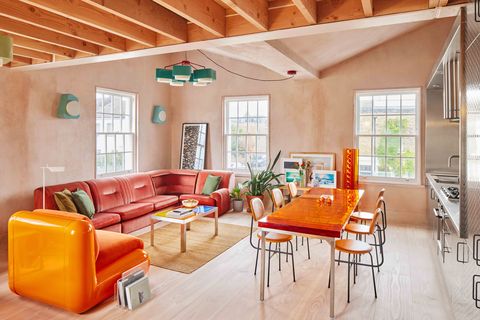 ‘I thought it would have been quite fraudulent of me not to go for it with my own place,’ says Alex Holloway, one half of interior-design duo Holloway Li. Since setting up business together in 2015, he and Na Li have been encouraging home owners and hotel brands to push the envelope, so when he found his perfect apartment just before the first lockdown in the UK, it was not the time to be timid.

It was a strange moment to move from the bustle of a shared house into what was a cold, rundown flat at the top of a converted Victorian end-of-terrace house in north London, but the lack of social engagements and slowdown of work projects (‘Na was on maternity leave, so while she was having an actual baby I was working on my baby,’ jokes Alex) gave the designer the chance to take this renovation slowly, adjusting the plan as he went.

It was when wandering into the second bedroom one day and seeing the amazing light from its window that he made the biggest decision of all: knocking down all of the internal walls.

The newly created open-plan space is a dream for flexible living, but there was one small snag. Alex had already placed the plumbing for a large bathtub in that room, inspired by the hotel suites he designed with Holloway Li.

‘Putting a tub in a bedroom was not ridiculous,’ he says, ‘but putting one in the main living space, beside the kitchen and my desk…’ It’s certainly a talking point, and one that elicits some funny looks from tradespeople.

A few amused comments weren’t going to dissuade Alex from doing exactly what worked for him, though. ‘I can watch TV in the bath,’ he says triumphantly. ‘Don’t be too jealous!’

It may be the design move that raises the most eyebrows, but the tub is not the only bold choice in this home. In fact, this is something of a ‘told you so’ space, showcasing ideas that were rejected by clients. There’s the architecturally pleasing stone skirting ramp that had previously proved to be a hard sell, and then there’s the kitchen.

Made from circle-brushed stainless steel, it’s inspired by the look of fast food outlets, as well as Alex’s nostalgic memories of the original Big Brother house. ‘The iconography of those early series was really futuristic,’ he explains. ‘The 1990s were very forward-looking: a decade of optimism. I think that’s the way interiors are going again now.’

Other design decades are represented, too. There’s a 1960s and 70s air to the space, thanks to retro furniture sourced by Alex’s girlfriend Elle Parmar Jenkins, the founder of online vintage marketplace Goods In, and the many orange perspex Holloway Li originals (some of which will be available to buy next year) that add to this home’s sepia-like glow. The latter include a bespoke dining table, created using offcuts from shower screens produced for the London showroom of bathroom brand Coalbrook.

When your influences are as varied as Alex’s, it’s a real bonus to live in what he calls, ‘a blank canvas’. Furniture and accessories are moved around or swapped in and out all the time, since both he and Elle use the space as an ‘evolving showroom’.

The choice to use plaster on the walls adds to this flexibility: ‘You can easily chase in a new bit of wire to put a wall light in, or patch over a mark where you’ve hung a picture up and it didn’t quite work.’

For Alex, his advice to himself on this project was exactly what he would say to clients: forget about added value and do what makes you happy. ‘For me,’ he says, ‘that happened to be a massive bathtub and a cool kitchen that reminded me of hanging around in chip shops when I was younger. You are allowed to have autobiographical flourish in your home.’ hollowayli.com; goodsin.co.uk

Related Stories
Holloway Li's sustainable approach to interiors
How to create a calm and relaxing space at home
This home colourfully rethinks country style
This content is created and maintained by a third party, and imported onto this page to help users provide their email addresses. You may be able to find more information about this and similar content at piano.io
Advertisement - Continue Reading Below
More From Houses
Tiles are used in unique ways in this bright home
Renovated Mallorcan villa with a siesta-ready look
Advertisement - Continue Reading Below
This home colourfully rethinks country style
Luxuriously sustainable home near Byron Bay
The making of London’s newest luxury apartment
Colourful Copenhagen home of a former minimalist
Tuscan holiday home that offers a taste of luxury
Inside Massimo Giorgetti’s fashionable alpine home
Brutalist beachfront living on Mexico’s coastline
Modern stained glass adds colour to a ancient home