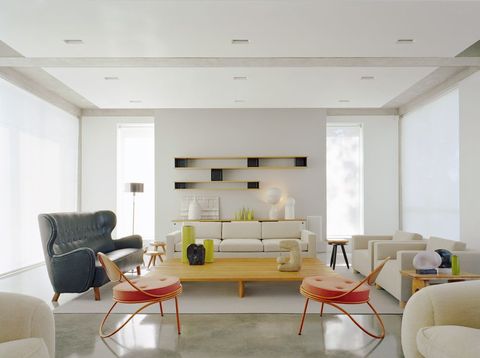 Whether we are talking about the great professional gurus such as Billy Baldwin and David Hicks, or the do-it-yourself decorating enthusiasts advanced by television shows and social media feeds, it wasn’t until the 19th century that businesses specialising in what is now known as ‘interior design’ became real enterprises.

Prior to that time, it was highly unusual for interiors to be perceived in a way that was independent from the architectural container in which they existed. The exterior and the rooms within were unified, with the inside space conceived and built at the same time as the outside space.

Today, we are so accustomed to thinking about interiors as separate endeavours, with their own multidisciplinary practice, that it’s hard to imagine that, at one time, the discipline of interior design simply didn’t exist at all.

Then there was Pierre Chareau’s Maison de Verre in Paris, completed in 1932, which was devised in a bespoke modernist style. Later, in the middle of the 20th century, after WWII, majestic loft spaces came into popularity, with repurposed factories, warehouses and various commercial spaces transformed into compelling, highly stylised residences.

The emergence of interior design as an independent enterprise has also resulted in myriad unintended consequences, from the popularity of decorating magazines to debates around modernity and postmodernity. Not to mention the efforts to rank interiors according to which looks are better, cooler, hipper, richer, more retro and other valuations of good taste. Last but no least, the rise of an interior design industry has resulted in trends devised to meet the constantly changing needs of fluid markets and, of course, styles that come and go according to the times.

Before the 19th century, it was architects, cabinetmakers, upholsterers who helped to create interiors

Charles Rice explains in his book The Emergence of the Interior that interior design as we know it appeared in the 19th century primarily in order to articulate new ideas regarding comfort and privacy in domestic spaces. The interior was now both a concept and a physical space. In this time period, the increasing availability of what we refer to as ‘the comforts of home’ coincided with the many advancements of the industrial age and the move from an agrarian lifestyle to an urban one.

Before the turn of the 19th century, it was architects, cabinetmakers, upholsterers and other craftspeople who helped to create home interiors; a decorator was someone whose time was yet to come. The insides and outsides of houses were constructed simultaneously. They were passed on to the next generation, and wealthy families displayed their inherited domestic belongings in the form of art collections, ancestral portraits and furniture, supplemented by objects acquired on their travels. This unified approach meant that the relationship between the enclosure and the enclosed, container and contained, was implicit and mostly uncontested.

The story of the interior will always encapsulate the intersection between the room and the space within which it is housed. It is this, among so many other things, that helps to explain the popularity, even the necessity, of interior decorators and interior designers – professionals who devote themselves to creating new ways of living our best lives within the home.

A Fantastical Folly by Jacques Grange

After his business partner, friend and lover Yves Saint Laurent died, Pierre Bergé (1930–2017), cofounder of the YSL empire, spent weekends at this bijou retreat (or datcha) near Trouville, Normandy. A datcha is a country or weekend home with origins dating back to 17th-century czarist Russia.

La Datcha, created by close friend Jacques Grange, was an intimate folly built in the grounds of thecouple’s 19th-century neo-gothic mansion, where every room was named after a Proust character. When Saint Laurent died in 2008, Bergé sold the mansion but kept the rights to the datcha. Grange added a bedroom reached by a covered walkway, and a Romany caravan for accommodating guests.

The chalet’s interior is inspired by the jewel colours and modernist geometry of the Ballets Russes costumes and sets, the work of Léon Bakst. Grange, a master at blending disparate elements, brought in the couple’s long-standing love of Morocco with antique stained-glass windows and an Orientalist mantelpiece. The result was a visual feast, cocooned within tactile, organic wood walls. ‘This has always been the favourite of my projects. It is pure fantasy,’ Grange said.

Naomi Leff (1939–2005) was one of the 20th century’s most influential American interior designers and, famously, the creator of the flagship Ralph Lauren store in Manhattan. Her style combined architectural elegance with comfort and understated luxury, leading her to design homes for an abundance of celebrity clients.

Art Deco details informed many of her projects, which were often influenced by the defined forms and lavish materials typical of the period. For this polished Manhattan townhouse she decorated for Joan Lappin, a keen sailor, Leff took inspiration from the ocean liners of the 1930s. Panelling made from anegré, an African tropical hardwood, lines the home, while fixtures and furniture come together in a beautifully executed composition of sweeping curves and sharp angles.

In this living room, two macassar ebony armchairs sit beside a minimalist granite fireplace. Above this is a cubist work by Jeanne Rij-Rousseau, the only piece to adorn the walls.

At the waterside property he designed for himself, US architect Lee Mindel proudly wears his influences on his sleeve. Taking the form of a sculptural, open structure in the mould of Louis Kahn when seen from outside, the home shows a tendency towards a modern Scandinavian style, which affirms Mindel’s love of designers such as Alvar Aalto.

In this living room, the architectural character of the house is included as part of the interior design, via the building’s exposed concrete beams situated between the smooth, gallery-like walls and ceiling segments. On the opposite side of the room, a cedarwood core that runs through the house frames a fireplace. A 1960s ‘Nuage’ bookcase by French architect and designer Charlotte Perriand hangs on the freestanding wall in the space – it is just one of a vast and carefully curated collection of 20th-century design objects that can be found in the house.

Also present are works by Gerrit Rietveld, Arne Jacobsen, Poul Kjærholm and Jean Prouvé. These are joined by items from more contemporary designers – among them are established names like Ron Arad and upcoming talents, such as Gideon Soares.

Named ‘best new house in the world’ by Architectural Review two years after its completion, this is an English country home like no other. With tranquil interiors such as Berlin’s reconstructed Neues Museum under his belt, it is no surprise that David Chipperfield’s luxury abode favours context over chintz. That context amounts to a sprawling woodland and rolling chalk downs, into which Fayland House is set like a dam.

The latter element is referenced by the house’s interior walls of white bricks and lime mortar, left exposed as they are on the exterior. With a similarly light-in-hue terrazzo floor, the aesthetic is minimal, but is lent warmth by the furnishings – as well as an injection of colour from nature.

The theme of monumentality continues in the bathroom, where a marble basin and bath are the star features, and floor-to-ceiling windows frame a rural panorama. The architect also designed bespoke furniture for this space, which later served as the basis for a collaboration with German brand E15, using the same design language and material approach as in Fayland House.

The London home of interior designer Ashley Hicks is situated in the Albany, an apartment complex tucked discreetly off Piccadilly, which, over the past two centuries, has been home to the likes of Lord Byron, JB Priestley and Aldous Huxley.

Inherited from his interior-designer father, David Nightingale Hicks, Ashley Hicks’ home is a playful mixture of his parent’s bold style and his own modern and anachronistic sensibilities. Where his father preferred antiques and museum pieces, Ashley has opted for contemporary, colourful objects – often produced by his own hand – such as giant cast-resin gems stacked into towers and obelisks covered with photocopies of jewel-tone onyx.

His influence can also be seen in the living room murals, which depict Constantinople in 1818, overlaid with ceremonial Roman pendants and surmounted by likenesses of the chickens Ashley keeps at his Oxfordshire home – a typical appropriation, as he puts it, ‘of layers of history with modern pizzazz’.

This house, designed by Deborah Berke’s New York-based practice, draws as much from the surrounding area’s rich heritage of modernist residences from the 1950s and 60s as it does from the beautiful landscape in which it nestles. These two threads inform and blend harmoniously in the living area, which is situated at the heart of the long, low structure.

The space is bookended by two volumes made from locally sourced pine, one housing the fireplace, the other forming part of the kitchen. The contextually aware choice of material means these focal points don’t compete with, but rather cohere with, the vistas afforded by the full-length windows that run along both sides of the room.

The floor is made from the same limestone as the patio beyond, further heightening the sense of connection with the outdoors. Particular attention has been paid to the colour of the furnishings and fixtures, which include contemporary pieces by American designers such as BDDW and Lindsey Adelman, as well as mid-century selections. Silver and pewter greys find representation in stone and fabric, while the browns of wood and leather are accented by brass.

Extracted from ‘Interiors: The Greatest Rooms of this Century’, £59.95, Phaidon, on sale 22 May

This content is created and maintained by a third party, and imported onto this page to help users provide their email addresses. You may be able to find more information about this and similar content at piano.io
Advertisement - Continue Reading Below
More From Inspiration
How to create a stylish at-home gym
Created for From ELLE Decoration for Created by ELLE Decoration for
Technogym
20 modern bedroom ideas for sleeping in style
Advertisement - Continue Reading Below
How to tap into the biggest design trends for AW21
Created by
sofa.com
51 of the best kitchen ideas for 2021 and beyond
17 creative ways to add colour to your kitchen
Designer Ben Frost’s ideas for a sustainable home
Created for From ELLE Decoration for Created by ELLE Decoration for
DFS
20 inspirational living room decorating ideas
Modern garden ideas for every outdoor space
How to use copper in the kitchen
How to choose a kitchen worktop