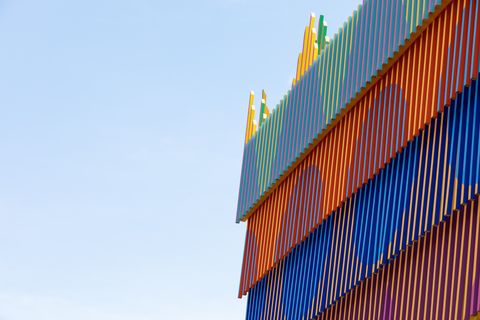 The annual month-long celebration of all things architectural returns to the capital for June, boasting an array of public events, from exhibitions, installations, tours and performances to discussions and debates. Set around the theme of boundaries, all activities will explore what it’s like to live in cities surrounded by borders, fences and general limits – physical, political or cultural.

‘We have an exceptional public programme for this year’s festival,’ says its director, Tamsie Thomson. ‘We want as many people as possible to be inspired and enthused, and I’m urging anyone with an interest in London’s built environment to get involved’. Believe the capital’s all skyscrapers and cement? Think again – there’s colour, ingenuity and fun on display.

One of the projects that combines all of these elements to brilliant effect is ‘The Colour Palace’, Dulwich Picture Gallery – this series of images show the making process. It’s the second such pavilion, created for south London’s Dulwich Picture Gallery in partnership with the London Festival of Architecture. Architecture firm Pricegore and Yinka Ilori – winner of the ELLE Decoration British Design Award 2019 for New Designer – have joined forces to design ‘The Colour Palace’. Its timber exterior draws on textiles found in the markets of Lagos, Nigeria, mirrors of which can be spotted in nearby Peckham’s ‘Little Lagos’, an area named for its African food scene.


Jenny Scott, director of the Dulwich Picture Gallery, explained the winning concept behind the collaboration at the pavilion’s unveiling. ‘What if when Sir John Soane went on his grand tour and took inspiration that led to a building like the Dulwich Picture Gallery. What if, he didn't go to Italy but instead went to West Africa. What if, not Venice but Lagos?’
Fabrication of Pricegore and Yinka Ilori’s Colour Palace
Jack Storey, RASKL Fabricators

Peckham-based architects Pricegore invited artist Ilori to work with them on the project, and the result is a joyous collision of European and African sensibilities, which was Pricegore’s intention. ‘Yinka’s work draws on his Nigerian heritage and the textiles of his grandmother, and our work is quite Eurocentric,’ explains Price, ‘but we wanted to make a project that was a celebration of multiculturalism in London, and particularly the south-east which has a large west African community.’

Looking for commonalities between their different approaches, the collaborators struck upon two in particular that drove the design of the pavilion: the use of geometry and secondly, the pragmatic solution of raising precious small buildings up on massive feet, or saddle stones, from dovecotes to grain stores.

Like Dulwich Picture Gallery, composed of a series of cube and double-cube shaped rooms, geometry runs throughout the pavilion, from the 2 x 2 timbers struts that compose the facade to the 10m x 10m x 10m measurements of the structure. Raised on steel legs wrapped in circular red concrete manhole chambers, inspired by elephant feet, the elevated pavilion, allows visitors to view the garden and remain connected to the surrounding landscape. ‘We also twisted the pavilion 45 degrees, towards the entrance so that it addresses the street, making it a very public gesture,’ adds Alex Gore.

The Colour Palace certainly invites interaction, two hot pink staircases allow visitors to ascend to a narrow walkway – a kind of internal gallery – and survey the pavilion below. Meanwhile, with the vivid tips of Ilori’s pink triangles posing an intriguing addition the low-rise Dulwich skyline, its sure to pique the interest of passersby and prove a popular summer attraction for locals and tourists alike.

The Colour Palace is open to the public until 22 September and is free to visit. For more highlights, head to the the London Festival of Architecture website.

This content is created and maintained by a third party, and imported onto this page to help users provide their email addresses. You may be able to find more information about this and similar content at piano.io
Advertisement - Continue Reading Below
More From Lifestyle & Culture
Inside The Londoner, the capital’s hot new hotel
Open House London is back for a nine day festival
Advertisement - Continue Reading Below
My Cultural Life: Russell Tovey
B_together is a new design-led hub for families
Lido revival: Britain’s outdoor baths are booming
My Cultural Life: Joe Lycett
Inside Tate Modern’s Sophie Taeuber-Arp exhibition
Hermés creates an oasis in the heart of London
My Cultural Life: Emily Mortimer
The best UK gardens to visit if you love design