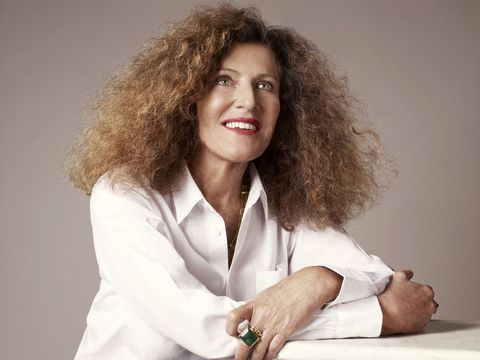 Known for the 1980s label for which she received an honorary CBE for contributions to British fashion, Farhi turned away from clothing in 2012 to pursue sculpting. Now she’s celebrating her largest solo exhibition,‘Nicole Farhi: Folds’, at London’s Beaux Arts gallery until 2 March. It showcases her exploration of the human form, focusing on the soft curves of the female body. ‘I wanted to show how expressive, beautiful and unexpected they can be,’ she says. ‘We need to look at ourselves a new.’ (nicolefarhisculpture.com; beauxartslondon.uk).

My favourite sound is the voice of soprano Maria Callas. For many years I worked to her soundtrack; it helped me concentrate. To anyone who wants to make their life in the arts, I recommend the documentary Maria by Callas. It shows the dedication you need to achieve a perfect line of clarity.

The record that makes me feel instantly happy is anything by Charles Trenet. His voice is so jolly; he was my parents’ favourite.

The Mars Room by Rachel Kushner

The book that has influenced me most is Letters to a Young Poet by Rilke. I find everything he says about art and its meaning in people’s lives to be wise and true. I can quote from it.

I’ve just read Rachel Kushner’s The Mars Room. Her frank portrayal of women caught up in the Californian penal system is completely heartbreaking.

The best film I’ve seen recently is Pietrangeli’s Hungry for Love. Four prostitutes start a restaurant in Italy as a cover for their real work. But their new venture is such a success they discover they prefer it.

I love the quote by WH Auden: ‘Routine, in an intelligent man, is a sign of ambition.’ So true! I try to start work at the same time every day, and never miss a day. Always have.

My favourite gallery is the Rodin Museum in Paris. It’s important to any sculptor. And so is the city’s Picasso Museum.

The last exhibition I went to see was ‘Gainsborough’s Family Portrait’ at the National Portrait Gallery, London. It was dazzling – much more informal and intimate than any other Gainsborough show.

The most recent play I’ve seen is by my husband David Hare. It’s called I’m Not Running, about why the Labour Party never has a female leader. The cast is immaculate. If I won the lottery I’d bid for Giacometti’s sculpture Woman With Her Throat Cut. It was the first piece I saw, aged 15. It made me realise that sculpture has a power no other art has.

The next place I’m travelling to is Egypt. I’m most looking forward to the oasis at Siwa.

If I had a free day in London I’d like to turn Hampstead’s Everyman back into a repertory cinema and watch old movies.

This content is created and maintained by a third party, and imported onto this page to help users provide their email addresses. You may be able to find more information about this and similar content at piano.io
Advertisement - Continue Reading Below
More From Lifestyle & Culture
Must-have kitchen kit, according to top chefs
Dimorestudio designs Browns’ new Mayfair flagship
Advertisement - Continue Reading Below
Five of the UK’s best destination art galleries
My Cultural Life: Caleb Femi
The world's most striking modern art museums
How to rewild your garden
My Cultural Life: Diane von Furstenberg
Why the suburbs are the new sexy
Meet the muralists painting streets in positivity
My Cultural Life: Andrea Riseborough