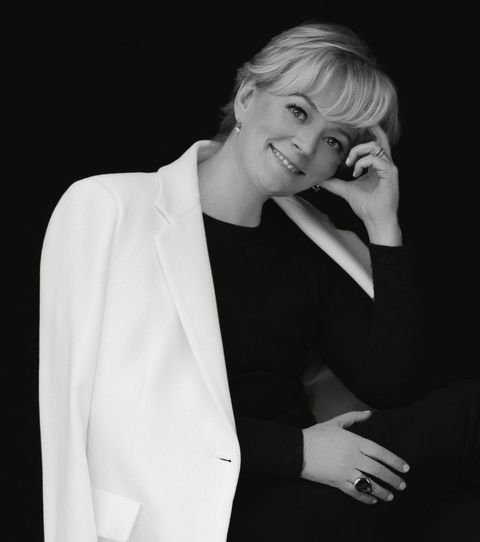 Having left school at 15, Jo Malone was working as a facialist when she started concocting bath oils in her kitchen. She opened her eponymous fragrance store on London’s Walton Street in 1994, selling her now famous colognes, lotions and candles. Malone sold the company five years later and, following a battle with breast cancer, left it entirely in 2006. She launched her new brand, Jo Loves, in 2011. Its chic red and white packaging may be a departure from the original black-etched cream boxes, but the aromas remain an intoxicating mix of botanicals and flora. ‘Scent,’ she says ‘can bring any space to life,’ and this includes your home – her signature cologne, ‘Pomelo’,a resoundingly citrussy fragrance, is now available as a candle.

My all-time favourite piece of music has to be Elton John’s I’m Still Standing.
The first big event I went to after my fight with cancer was Elton’s White Tie and Tiara
Ball. When that song came on, all of my close friends stood up with me, we held hands and sang the chorus. It was such a touching moment; one that I will remember forever.

I’m now listening to Proud Mary and The Best by Tina Turner on repeat because I recently went to see Tina – TheTina Turner Musical, which made me fall back in love with Motown.

The track that makes me feel instantly happy is Dancing Queen by ABBA. I adore that moment in the film Mamma Mia! when all the women come out and dance in the streets... The song evokes a magical feeling of freedom, love and joy. I admire Greek culture and how it is centred around the family and inclusive of all ages.

The book that has influenced me the most is A Woman of Substance by Barbara Taylor Bradford. From humble beginnings as a maid, the book’s heroine, Emma Harte, builds an empire. As a girl with dyslexia, growing up on a council estate, it took me months to read, but I remember thinking that I was going to be Emma.

A Woman of Substance by Barbara Taylor Bradford
Doubleday

I’m currently reading Next Year in Havana by Chanel Cleeton. It’s about a grandmother and her granddaughter. There’s love and friendship on every page, and it describes the Cuban culture in the most wonderful way: I can smell everything I’m reading and I don’t want the story to end.

My favourite film? I’m a BFI Ambassador and film is like fragrance to me – it’s impossible to choose a favourite. But my desert island movie would be Chef. I love the story of hope, family and rediscovery of self. It also makes you want to taste a Cuban sandwich more than anything in the world.

The art gallery I always return to is New York’s Neue Galerie, as it houses my favourite piece of art: The Woman in Gold by Gustav Klimt (5). I stare at it and allow it to tell me story after story; it speaks volumes.

A garden I love? The orange blossom and rose gardens at the International Perfume Museum in Grasse, France. From the moment the flowers come into bloom in early summer, the smell is breathtaking.

The last play I saw was Nina Raine’s Consent at the Harold Pinter Theatre. It had me gripped. It was brilliantly told, shocking and had me feeling waves of emotions such as anger, pity and sadness.

My top destination is Saint-Paul de Vence in France. I’m inspired by the colours and scents there. It’s a place where I can clear my head and let my imagination run wild.