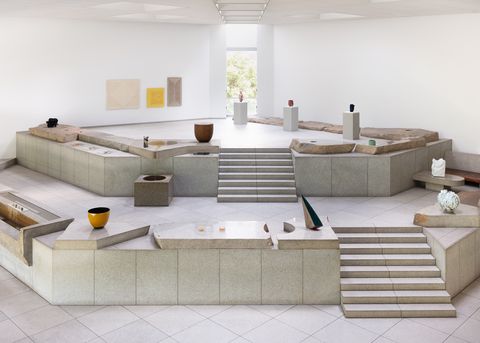 Japanese lacquer artist Genta Ishizuka has won the third Loewe Craft Prize for his 2018 work, ‘Surface Tactility #11’. Chosen from 29 finalists (whittled down from 2,500 entries) from across the globe, he was awarded the silver trophy and €50k prize at a ceremony in Japan, where the Loewe Foundation Craft Prize 2019 is exhibited this year – following London for 2018 and Madrid for the inaugural 2017 prize.

‘Ishizuka’s work proves that craft can be open and shows the freedom of creation,’ commented Jonathan Anderson, Loewe creative director and founder of the prize. ‘His use of an ancient lacquer work techniques in a contemporary form breaks conventions and represents a new sculptural vision in craft.’

The Kyoto-based artisan, who enjoyed a spell studying under Ron Arad at the RCA, is a rising star in the art of lacquerware, known for reinventing traditional Urushi by combining it with dry lacquer – a method akin to papier-mâché – to create two and three dimensional organic sculptures. The winning piece was handmade using the kanshitsu technique, with naturally-sourced urushi sap as a foundation. Consecutive coats of lacquer produce a glossy allure that emanates both depth and transparency. This interplay between exterior and interior harks back to his inspiration: oranges in a mesh bag spotted at a supermarket. Incredibly time-consuming, the resulting pieces are both sensuous and intriguing, investigating the essence of physicality. He has exhibited his work in the UK, Japan and America.

The jury, composed of international leading figures from the worlds of design, architecture, journalism and museum curatorship – such as Patricia Urquiola, Deyan Sudjic and Naoto Fukasawa – also agreed upon on two special mentions for British artist Harry Morgan and Japanese artist Kazuhito Takadoi. Edinburgh-based artist Morgan, whose work ‘Untitled’ from ‘Dichotomy Series, 2018’ impressed judges for its ‘paradoxical confrontation of materials which don’t belong together’. His pedestal-like sculpture is a combination of concrete and glass, referencing the brutality of architecture and the delicacy of Venetian murrine glassmaking.

Meanwhile, UK-based artist and former garden designer Takadoi’s work was applauded for ‘being a craft without a name’. Avoiding symmetry and taking a ‘less is more’ approach, he grows many of his own materials and works entirely with organic matter, creating forms that fluctuate as the ingredients mature and evolve.

Anderson set up the prize in 2016 to acknowledge the importance of craft in today’s culture and to honour those working artisans whose innovations set a standard for the future. ‘Craft is the essence of Loewe’, Anderson says, ‘as a house, we are about craft in the purest sense of the word. That is where our modernity lies, and it will always be relevant.’